XMM-Newton observations of IGR J18410-0535: the ingestion of a clump by a supergiant fast X-ray transient

Context. IGR J18410-0535 is a supergiant fast X-ray transients. This subclass of supergiant X-ray binaries typically undergoes few-hour-long outbursts reaching luminosities of 1036-1037 erg s-1, the occurrence of which has been ascribed to the combined effect of the intense magnetic field and rotation of the compact object hosted in them and/or the presence of dense structures ("clumps") in the wind of their supergiant companion.
Aims: IGR J18410-0535 was observed for 45 ks by XMM-Newton as part of a program designed to study the quiescent emission of supergiant fast X-ray transients and clarify the origin of their peculiar X-ray variability.
Methods: We carried out an in-depth spectral and timing analysis of these XMM-Newton data.
Results: IGR J18410-0535 underwent a bright X-ray flare that started about 5 ks after the beginning of the observation and lasted for ~15 ks. Thanks to the capabilities of the instruments on-board XMM-Newton, the whole event could be followed in great detail. The results of our analysis provide strong convincing evidence that the flare was produced by the accretion of matter from a massive clump onto the compact object hosted in this system.
Conclusions: By assuming that the clump is spherical and moves at the same velocity as the homogeneous stellar wind, we estimate a mass and radius of Mcl ≃ 1.4 × 1022 g and Rcl ≃ 8 × 1011 cm. These are in qualitative agreement with values expected from theoretical calculations. We found no evidence of pulsations at ~4.7 s after investigating coherent modulations in the range 3.5 ms-100 s. A reanalysis of the archival ASCA and Swift data of IGR J18410-0535, for which these pulsations were previously detected, revealed that they were likely to be due to a statistical fluctuation and an instrumental effect, respectively. 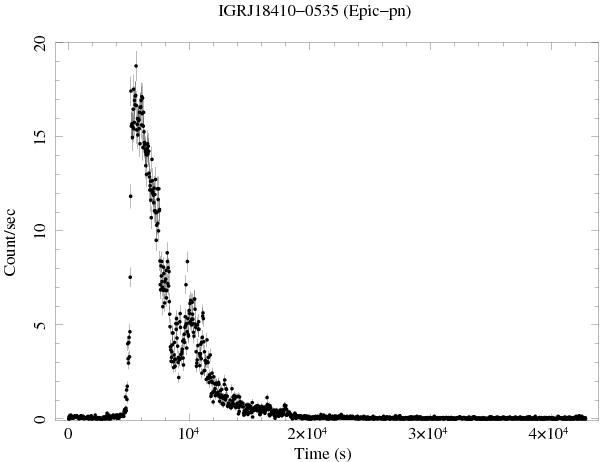