Aims: The solar transition region satisfies the conditions for appearance of the non-thermal κ-distribution. We aim to prove the occurrence of the non-thermal κ-distribution in the solar transition region and diagnose its parameters.
Methods: The intensity ratios of Si iii lines observed by SUMER in 1100-1320 Å region do not correspond to the line ratios computed under the assumption of the Maxwellian electron distribution. We computed a set of synthetic Si iii spectra for the electron κ-distributions with different values of the parameter κ. We had to include the radiation field in our calculations to explain the observed line ratios. We propose diagnostics of the parameter κ and other plasma parameters and analyze the effect of the different gradient of differential emission measures (DEM) on the presented calculations.
Results: The used line ratios are sensitive to T, density and the parameter κ. All these parameters were determined from the SUMER observations for the coronal hole (CH), quiet Sun (QS) and active region (AR) using our proposed diagnostics. A strong gradient of DEM influences the diagnosed parameters of plasma. The essential contributions to the total line intensities do not correspond to single T but a wider range of T, and they originate in different atmospheric layers. The amount of the contributions from these atmospheric layers depends on the gradient of DEM and the shape of the electron distribution function.
Conclusions: The κ-distribution is able to explain the observed Si iii line spectrum in the transition region. The degree of non-thermality increases with the activity of the solar region, it is lower for CH and higher for the AR. The DEM influences the diagnosed T and Ne but it has only little effect on the diagnostics of the parameter κ. 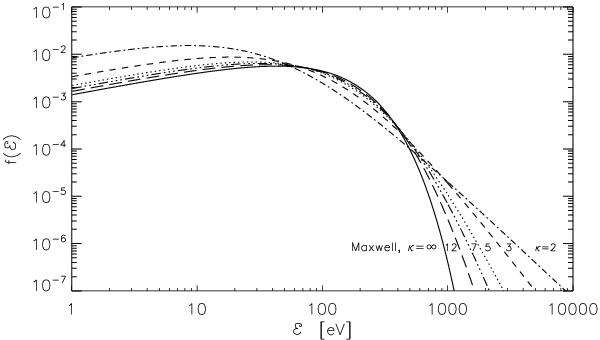