The spectroscopic orbit of Capella revisited

Context. Capella is among the few binary stars with two evolved giant components. The hotter component is a chromospherically active star within the Hertzsprung gap, while the cooler star is possibly helium-core burning.
Aims: The known inclination of the orbital plane from astrometry in combination with precise radial velocities will allow very accurate masses to be determined for the individual Capella stars. This will constrain their evolutionary stage and possibly the role of the active star's magnetic field on the dynamical evolution of the binary system.
Methods: We obtained a total of 438 high-resolution échelle spectra during the years 2007-2010 and used the measured velocities to recompute the orbital elements. Our double-lined orbital solution yields average residuals of 64 m s-1 for the cool component and 297 m s-1 for the more rapidly rotating hotter component.
Results: The semi-amplitude of the cool component is smaller by 0.045 km s-1 than the orbit determination of Torres et al. from data taken during 1996-1999 but more precise by a factor of 5.5, while for the hotter component it is larger by 0.580 km s-1 and more precise by a factor of 3.6. This corresponds to masses of 2.573 ± 0.009 M⊙ and 2.488 ± 0.008 M⊙ for the cool and hot component, respectively. Their relative errors of 0.34% and 0.30% are about half of the values given in Torres et al. for a combined literature-data solution but with absolute values different by 4% and 2% for the two components, respectively. The mass ratio of the system is therefore q = MA/MB = 0.9673 ± 0.0020.
Conclusions: Our orbit is the most precise and also likely to be the most accurate ever obtained for Capella.

Based on data obtained with the STELLA robotic telescope in Tenerife, an AIP facility jointly operated by AIP and IAC.Full Table 1 is only available at the CDS via anonymous ftp to cdsarc.u-strasbg.fr (130.79.128.5) or via http://cdsarc.u-strasbg.fr/viz-bin/qcat?J/A+A/531/A89 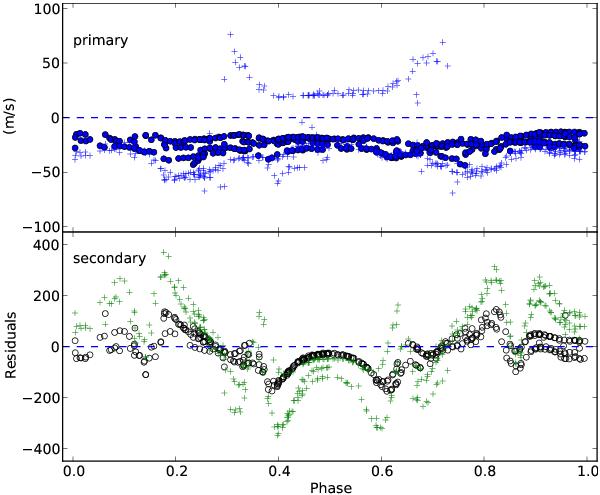