The evolutionary state of Miras with changing pulsation periods

Context. Miras are long-period variables thought to be in the asymptotic giant branch (AGB) phase of evolution. In about one percent of known Miras, the pulsation period is changing. It has been speculated that this changing period is the consequence of a recent thermal pulse in these stars.
Aims: We aim to clarify the evolutionary state of these stars, and to determine in particular whether or not they are in the thermally-pulsing (TP-)AGB phase.
Methods: One important piece of information that has been neglected so far when determining the evolutionary state is the presence of the radio-active s-process element technetium (Tc). We obtained high-resolution, high signal-to-noise-ratio optical spectra of a dozen prominent Mira variables with changing pulsation period to search for this indicator of TPs and dredge-up. We also use the spectra to measure lithium (Li) abundances. Furthermore, we establish the evolutionary states of our sample stars by means of their present-day periods and luminosities.
Results: Among the twelve sample stars observed in this programme, five were found to show absorption lines of Tc. is found to be a carbon-star, its period increase in the past decades possibly having stopped by now. We report a possible switch in the pulsation mode of from Mira-like to semi-regular variability in the past two years. , on the other hand, is probably a fairly massive AGB star, which could be true for all meandering Miras. Finally, we assign to the metal-poor thick disk with properties very similar to the short-period, metal-poor Miras.
Conclusions: We conclude that there is no clear correlation between period change class and Tc presence. The stars that are most likely to have experienced a recent TP are BH Cru and , although their rates of period change are quite different.

Based on observations made with the Mercator Telescope, operated on the island of La Palma by the Flemish Community, at the Spanish Observatorio del Roque de los Muchachos of the Instituto de Astrofísica de Canarias, and with the Swiss 1.2 m Euler telescope at La Silla, Chile. The spectra are only available at the CDS via anonymous ftp to cdsarc.u-strasbg.fr (130.79.128.5) or via http://cdsarc.u-strasbg.fr/viz-bin/qcat?J/A+A/531/A88 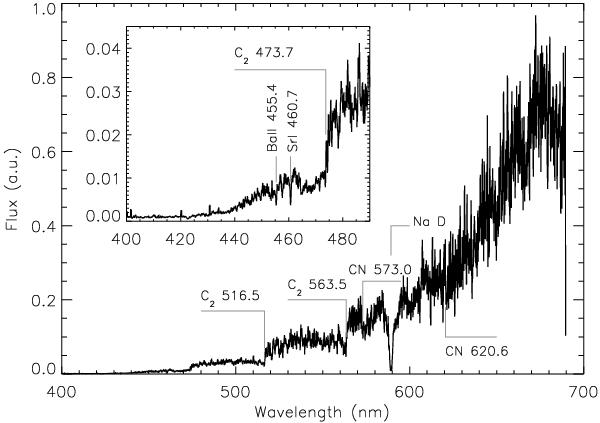