Aims: We investigate the interaction of nonlinear fast magnetoacoustic waves with a magnetic null point in connection with the triggering of solar flares.
Methods: We model the propagation of fast, initially axisymmetric waves towards a two-dimensional isothermal magnetic null point in terms of ideal magnetohydrodynamic equations. The numerical simulations are carried out with the Lagrangian remap code Lare2D.
Results: Dynamics of initially axisymmetric fast pulses of small amplitude is found to be consistent with a linear analytical solution proposed earlier. The increase in the amplitude leads to the nonlinear acceleration of the compression pulse and deceleration of the rarefaction pulse and hence the distortion of the wave front. The pulse experiences nonlinear steepening in the radial direction either on the leading or the back slopes for the compression and rarefaction pulses, respectively. This effect is most pronounced in the directions perpendicular to the field. Hence, the nonlinear evolution of the fast pulse depends on the polar angle. The nonlinear steepening generates the sharp spikes of the electric current density. As in the uniform medium, the position of the shock formation also depends on the initial width of the pulse. Only sufficiently smooth and low-amplitude initial pulses can reach the vicinity of the null point, create there current density spikes, and initiate magnetic reconnection by seeding anomalous electrical resistivity. Steeper and higher amplitude initial pulses overturn at larger distance from the null point, and cannot trigger reconnection. 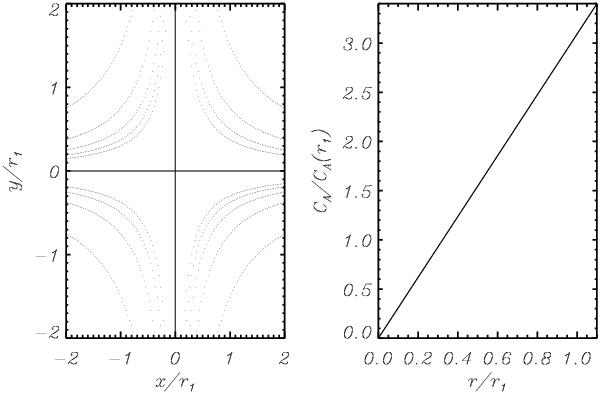