WASP-23b: a transiting hot Jupiter around a K dwarf and its Rossiter-McLaughlin effect

We report the discovery of a new transiting planet in the southern hemisphere. It was found by the WASP-south transit survey and confirmed photometrically and spectroscopically by the 1.2 m Swiss Euler telescope, LCOGT 2m Faulkes South Telescope, the 60 cm TRAPPIST telescope, and the ESO 3.6 m telescope. The orbital period of the planet is 2.94 days. We find that it is a gas giant with a mass of 0.88 ± 0.10 MJ and an estimated radius of 0.96 ± 0.05 RJ. We obtained spectra during transit with the HARPS spectrograph and detect the Rossiter-McLaughlin effect despite its small amplitude. Because of the low signal-to-noise ratio of the effect and a small impact parameter, we cannot place a strong constraint on the projected spin-orbit angle. We find two conflicting values for the stellar rotation. We find, via spectral line broadening, that v sin I = 2.2 ± 0.3 km s-1, while applying another method, based on the activity level using the index log R'_HK, gives an equatorial rotation velocity of only v = 1.35 ± 0.20 km s-1. Using these as priors in our analysis, the planet might be either misaligned or aligned. This result raises doubts about the use of such priors. There is evidence of neither eccentricity nor any radial velocity drift with time.

Using WASP-South photometric observations confirmed with LCOGT Faulkes South Telescope, the 60 cm TRAPPIST telescope, the CORALIE spectrograph and the camera from the Swiss 1.2 m Euler Telescope placed at La Silla, Chile, as well as with the HARPS spectrograph, mounted on the ESO 3.6 m, also at La Silla, under proposal 084.C-0185. The data is publicly available at the CDS Strasbourg and on demand to the main author.RV data is only available at the CDS via anonymous ftp to cdsarc.u-strasbg.fr (130.79.128.5) or via http://cdsarc.u-strasbg.fr/viz-bin/qcat?J/A+A/531/A24Appendix is available in electronic form at http://www.aanda.org 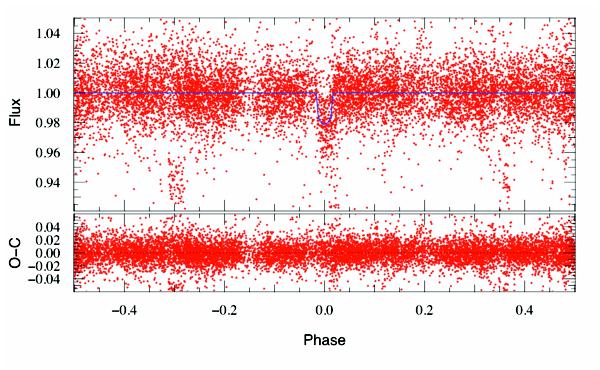