VFTS 682 is located in an active star-forming region, at a projected distance of 29 pc from the young massive cluster R136 in the Tarantula Nebula of the Large Magellanic Cloud. It was previously reported as a candidate young stellar object, and more recently spectroscopically revealed as a hydrogen-rich Wolf-Rayet (WN5h) star. Our aim is to obtain the stellar properties, such as its intrinsic luminosity, and to investigate the origin of VFTS 682. To this purpose, we model optical spectra from the VLT-FLAMES Tarantula Survey with the non-LTE stellar atmosphere code cmfgen, as well as the spectral energy distribution from complementary optical and infrared photometry. We find the extinction properties to be highly peculiar (RV ~ 4.7), and obtain a surprisingly high luminosity log (L/L⊙) = 6.5 ± 0.2, corresponding to a present-day mass of ~150 M⊙. The high effective temperature of 52.2 ± 2.5 kK might be explained by chemically homogeneous evolution - suggested to be the key process in the path towards long gamma-ray bursts. Lightcurves of the object show variability at the 10% level on a timescale of years. Such changes are unprecedented for classical Wolf-Rayet stars, and are more reminiscent of Luminous Blue Variables. Finally, we discuss two possibilities for the origin of VFTS 682: (i) the star either formed in situ, which would have profound implications for the formation mechanism of massive stars, or (ii) VFTS 682 is a slow runaway star that originated from the dense cluster R136, which would make it the mostmassive runaway known to date.

Based on observations at the European Southern Observatory Very Large Telescope in programme 182.D-0222. 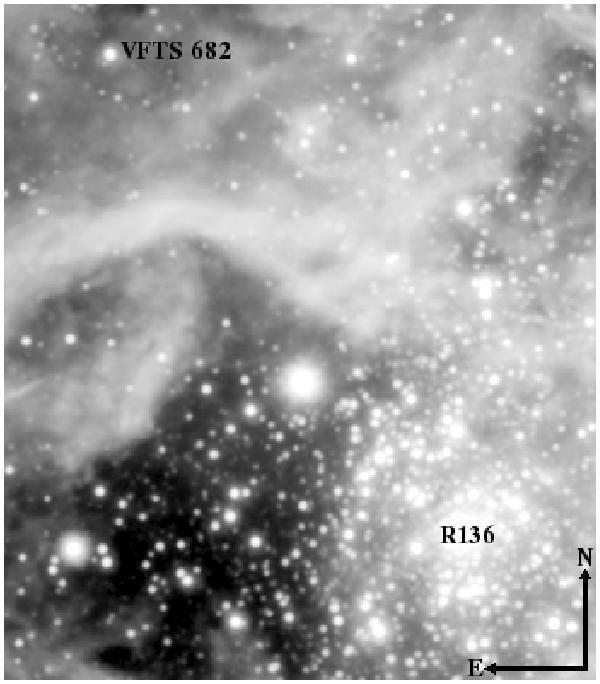