On the kinematics of massive star forming regions: the case of IRAS 17233-3606

Context. Direct observations of accretion disks around high-mass young stellar objects would help to discriminate between different models of formation of massive stars. However, given the complexity of massive star forming regions, such studies are still limited in number. Additionally, there is still no general consensus on the molecular tracers to be used for such investigations.
Aims: Because of its close distance and high luminosity, IRAS 17233-3606 is a potential laboratory to search for traces of rotation in the inner gas around the protostar(s). Therefore, we selected the source for a detailed analysis of its molecular emission at 230 GHz with the SMA.
Methods: We systematically investigated the velocity fields of transitions in the SMA spectra which are not affected by overlap with other transitions, and searched for coherent velocity gradients to compare them to the distribution of outflows in the region. Beside CO emission we also used high-angular H2 images to trace the outflow motions driven by the IRAS 17233-3606 cluster.
Results: We find linear velocity gradients in many transitions of the same molecular species and in several molecules. We report the first detection of HNCO in molecular outflows from massive YSOs. We discuss the CH3CN velocity gradient taking into account various scenarios: rotation, presence of multiple unresolved sources with different velocities, and outflow(s). Although other interpretations cannot be ruled out, we propose that the CH3CN emission might be affected by the outflows of the region. Higher angular observations are needed to discriminate between the different scenarios.
Conclusions: The present observations, with the possible association of CH3CN with outflows in a few thousands AU around the YSOs' cluster, (i) question the choice of the tracer to probe rotating structures, and (ii) show the importance of the use of H2 images for detailed studies of kinematics. 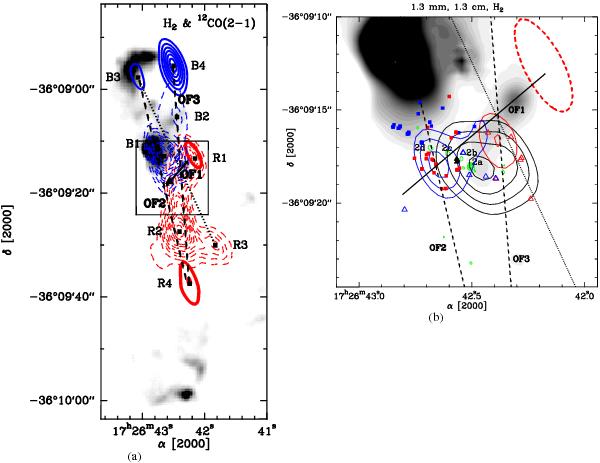