Spectroscopic and physical parameters of Galactic O-type stars. I. Effects of rotation and spectral resolving power in the spectral classification of dwarfs and giants

Context. The modern-era spectral classification of O-stars relies on either the Walborn or the Conti-Mathys scheme. Since both of these approaches have been developed using low-quality photographic data, their application to high-quality digital data might not be straightforward and be hampered by problems and complications that have not yet been appreciated.
Aims: We investigate the correspondence between photographic and digital classification of low luminosity O-type stars (dwarfs and giants) of solar metallicity.
Methods: Using high-resolution spectra obtained with the ESO/MPG 2.2 m telescope in La Silla and following the premises of the Walborn and Conti classification schemes, we determined the spectral types and luminosity classes of 19 Galactic O-type stars and compared them to those attributed by Walborn and Mathys based on low-quality data.
Results: Our analysis reveals that the morphological spectral types assigned using high-resolution data are systematically later (by up to 1.5 subtypes) then those attributed by Walborn. By means of line-profile simulations, we show that part of this discrepancy is more likely caused by the combined effect of stellar rotation and high spectral resolution on the depth of helium lines used as spectral type indicators. In addition, we demonstrate that at least for narrow-lined stars the "rotational effect" does not disappear when the high-resolution spectra are degraded to the resolution of the Walborn standards. We also find evidence of a systematic difference between our high-resolution quantitative spectral types and those assigned by Mathys.
Conclusions: Rotation and spectral resolution are important third parameters in the spectral classification of O-type stars. To obtain reliable spectral classes within the Walborn approach, the unknown and the standard spectra must be compared at the same resolution and vsini . Owing to resolution effects, the Conti approach might also need to be updated.

Based on observations collected at the European Organisation for Astronomical Research in the Southern Hemisphere, Chile, under programme ID 072.D-0196.Appendices A and B are only available in electronic form at http://www.aanda.org 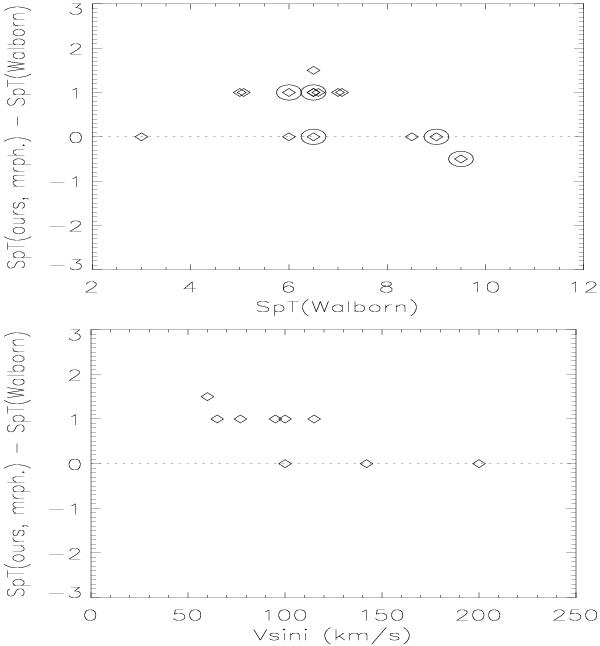