Context. The soft X-ray emission from high density plasma observed in several CTTS is usually associated with the accretion process. However, it is still unclear whether this high density "cool" plasma is heated in the accretion shock, or if it is coronal plasma fed or modified by the accretion process.
Aims: We conducted a coordinated quasi-simultaneous optical and X-ray observing campaign of the CTTS . In this paper, we analyze Chandra grating spectrometer data and attempt to correlate the observed X-ray emitting plasma components with the characteristics of the accretion process and the stellar magnetic field constrained by simultaneous optical observations.
Methods: We analyze a 200 ks Chandra/HETGS observation, subdivided into two 100 ks segments, of the CTTS . For the two observing segments corresponding to two different phases within one stellar rotation, we measure the density of the cool plasma component and the emission measure distribution.
Results: The X-ray emitting plasma covers a wide range of temperatures: from 2 up to 34 MK. The cool plasma component of (T ≈ 3-4 MK) varies between the two segments of the Chandra observation: during the first observing segment high density plasma (log Ne = 12.1+0.6_{-1.1}) with high EM at 3-4 MK is present, whereas, during the second segment, this plasma component has lower EM and lower density (log Ne < 11.5), although the statistical significance of these differences is marginal. Hotter plasma components, T ≥ 10 MK, vary on short timescales ( 10 ks), which are typical of coronal plasma. A clear flare, detected during the first segment, might be located in a large coronal loop (half length >3 R⋆).
Conclusions: Our observation provides additional confirmation that the dense cool plasma at a few MK in CTTS is material heated in the accretion shock. The variability of this cool plasma component on may be explained in terms of X-rays emitted in the accretion shock and seen with different viewing angles at the two rotational phases probed by our observation. In particular, during the first time interval a direct view of the shock region is possible, while, during the second, the accretion funnel itself intersects the line of sight to the shock region, preventing us from observing the accretion-driven X-rays. 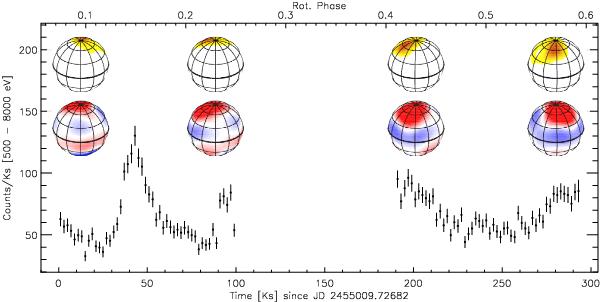