Aims: We present one-dimensional aperture synthesis imaging of the red supergiant Betelgeuse (α Ori) with VLTI/AMBER. We reconstructed for the first time one-dimensional images in the individual CO first overtone lines. Our aim is to probe the dynamics of the inhomogeneous atmosphere and its time variation.
Methods: Betelgeuse was observed between 2.28 and 2.31 μm with VLTI/AMBER using the 16-32-48 m telescope configuration with a spectral resolution up to 12 000 and an angular resolution of 9.8 mas. The good nearly one-dimensional uv coverage allows us to reconstruct one-dimensional projection images (i.e., one-dimensional projections of the object's two-dimensional intensity distributions).
Results: The reconstructed one-dimensional projection images reveal that the star appears differently in the blue wing, line center, and red wing of the individual CO lines. The one-dimensional projection images in the blue wing and line center show a pronounced, asymmetrically extended component up to ~1.3 R⋆, while those in the red wing do not show such a component. The observed one-dimensional projection images in the lines can be reasonably explained by a model in which the CO gas within a region more than half as large as the stellar size is moving slightly outward with 0-5 km s-1, while the gas in the remaining region is infalling fast with 20-30 km s-1. A comparison between the CO line AMBER data taken in 2008 and 2009 shows a significant time variation in the dynamics of the CO line-forming region in the photosphere and the outer atmosphere. In contrast to the line data, the reconstructed one-dimensional projection images in the continuum show only a slight deviation from a uniform disk or limb-darkened disk. We derive a uniform-disk diameter of 42.05 ± 0.05 mas and a power-law-type limb-darkened disk diameter of 42.49 ± 0.06 mas and a limb-darkening parameter of (9.7 ± 0.5) × 10-2. This latter angular diameter leads to an effective temperature of 3690 ± 54 K for the continuum-forming layer. These diameters confirm that the near-IR size of Betelgeuse was nearly constant over the last 18 years, in marked contrast to the recently reported noticeable decrease in the mid-IR size. The continuum data taken in 2008 and 2009 reveal no or only marginal time variations, much smaller than the maximum variation predicted by the current three-dimensional convection simulations.
Conclusions: Our two-epoch AMBER observations show that the outer atmosphere extending to ~1.3-1.4 R⋆ is asymmetric and its dynamics is dominated by vigorous, inhomogeneous large-scale motions, whose overall nature changes drastically within one year. This is likely linked to the wind-driving mechanism in red supergiants.

Based on AMBER observations made with the Very Large Telescope Interferometer of the European Southern Observatory. Program ID: 082.D-0280 (AMBER Guaranteed Time Observation).Appendices are available in electronic form at http://www.aanda.org 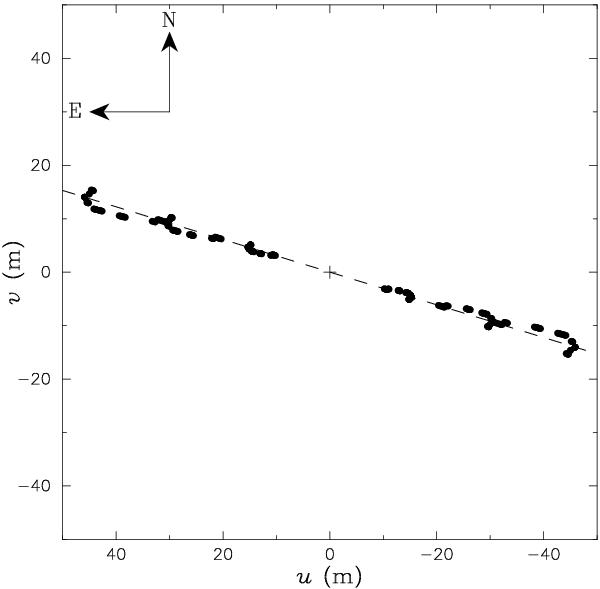