Nature vs. nurture in the low-density environment: structure and evolution of early-type dwarf galaxies in poor groups

We present the stellar population properties of 13 dwarf galaxies residing in poor groups (low-density environment, LDE) observed with VIMOS at VLT. Ages, metallicities, and [α/Fe] ratios were derived within an r < re/2 aperture from the Lick indices Hβ, Mgb, Fe5270, and Fe5335 through comparison with our simple stellar population (SSP) models that account for variable [α/Fe] ratios. For a fiducial subsample of 10 early-type dwarfs, we derived median values and scatters around the medians of 5.7 ± 4.4 Gyr, -0.26 ± 0.28, and -0.04 ± 0.33 for age, log Z/Z☉, and [α/Fe] , respectively. For a selection of bright early-type galaxies (ETGs) from an earlier sample residing in a comparable environment, we derive median values of 9.8 ± 4.1 Gyr, 0.06 ± 0.16, and 0.18 ± 0.13 for the same stellar population parameters. It follows that dwarfs are on average younger, less metal rich, and less enhanced in the α-elements than giants, in agreement with the extrapolation to the low-mass regime of the scaling relations derived for giant ETGs. From the total (dwarf + giant) sample, we find that age ∝ σ0.39 ± 0.22, Z ∝ σ0.80 ± 0.16, and α/Fe ∝ σ0.42 ± 0.22. We also find correlations with morphology, in the sense that the metallicity and the [α/Fe] ratio increase with the Sersic index n or with the bulge-to-total light fraction B/T. The presence of a strong morphology-[α/Fe] relation appears to contradict the possible evolution along the Hubble sequence from low B/T (low n) to high B/T (high n) galaxies. We also investigate the role played by environment by comparing the properties of our LDE dwarfs with those of Coma red passive dwarfs from the literature. We find possible evidence that LDE dwarfs experienced more prolonged star formations than Coma dwarfs, however larger data samples are needed to draw firmer conclusions.

Based on observations obtained at the European Southern Observatory, La Silla, Chile. 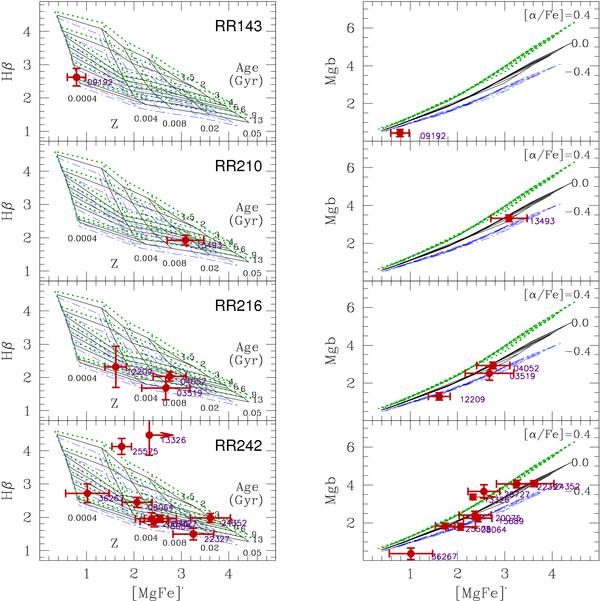