Context. The recently completed re-reduction of the Hipparcos data by van Leeuwen (2007a, Astrophysics and Space Science Library, 350) makes it possible to search for the astrometric signatures of planets and brown dwarfs known from radial velocity surveys in the improved Hipparcos intermediate astrometric data.
Aims: Our aim is to put more significant constraints on the orbital parameters which cannot be derived from radial velocities alone, i.e. the inclination and the longitude of the ascending node, than was possible before. The determination of the inclination in particular allows to calculate an unambiguous companion mass, rather than the lower mass limit which can be obtained from radial velocity measurements.
Methods: We fitted the astrometric orbits of 310 substellar companions around 258 stars, which were all discovered via the radial velocity method, to the Hipparcos intermediate astrometric data provided by van Leeuwen.
Results: Even though the astrometric signatures of the companions cannot be detected in most cases, the Hipparcos data still provide lower limits on the inclination for all but 67 of the investigated companions, which translates into upper limits on the masses of the unseen companions. For nine companions the derived upper mass limit lies in the planetary and for 75 companions in the brown dwarf mass regime, proving the substellar nature of those objects. Two of those objects have minimum masses also in the brown dwarf regime and are thus proven to be brown dwarfs. The confirmed planets are the ones around Pollux (β Gem b), ɛ Eri b, ɛ Ret b, μ Ara b, υ And c and d, 47 UMa b, HD 10647 b and HD 147513 b. The confirmed brown dwarfs are HD 137510 b and HD 168443 c. In 20 cases, the astrometric signature of the substellar companion was detected in the Hipparcos data, resulting in reasonable constraints on inclination and ascending node. Of these 20 companions, three are confirmed as planets or lightweight brown dwarfs (HD 87833 b, ι Dra b, and γ Cep b), two as brown dwarfs (HD 106252 b and HD 168443 b), and four are low-mass stars (BD -04 782 b, HD 112758 b, ρ CrB b, and HD169822 b). Of the others, many are either brown dwarfs or very low mass stars. For ɛ Eri, we derive a solution which is very similar to the one obtained using Hubble Space Telescope data.

Based on observations collected by the Hipparcos satellite.Table 1 and Appendix are only available in electronic form at http://www.aanda.org 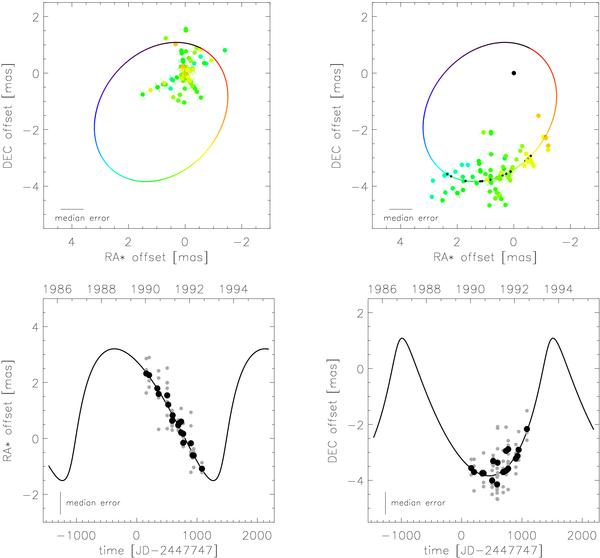