The cold origin of the warm dust around ɛ Eridani

Context. The nearby K2 V star ɛ Eridani hosts one known inner planet, an outer Kuiper belt analog, and an inner disk of warm dust. Spitzer/IRS measurements indicate that the warm dust is present at distances as close as a few AU from the star. Its origin is puzzling, since an "asteroid belt" that could produce this dust would be unstable because of the known inner planet.
Aims: Here we test a hypothesis that the observed warm dust is generated by collisions in the outer belt and is transported inward by Poynting-Robertson drag and strong stellar winds.
Methods: We simulated a steady-state distribution of dust particles outside 10 AU with a collisional code and in the inner region (r < 10 AU) with single-particle numerical integrations. By assuming homogeneous spherical dust grains composed of ice and astrosilicate, we calculated the thermal emission of the dust and compared it with observations. We investigated two different orbital configurations for the inner planet inferred from radial velocity measurements, one with a highly eccentric orbit of e = 0.7 and another one with a moderate eccentricity of e = 0.25. We also produced a simulation without a planet.
Results: Our models can reproduce the shape and magnitude of the observed spectral energy distribution from mid-infrared to submillimeter wavelengths, as well as the Spitzer/MIPS radial brightness profiles. The best-fit dust composition includes both water ice and silicates. The results are similar for the two possible planetary orbits and without a planet.
Conclusions: The observed warm dust in the ɛ Eridani system can indeed stem from the outer "Kuiper belt" and be transported inward by Poynting-Robertson and stellar wind drag. The inner planet has little effect on the distribution of dust, so that the planetary orbit could not be constrained. Reasonable agreement between the model and observations can only be achieved by relaxing the assumption of purely silicate dust and assuming a mixture of silicate and water ice in comparable amounts. 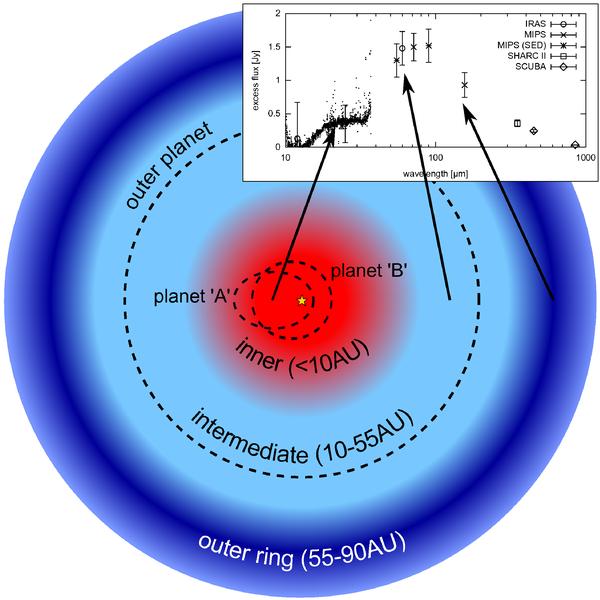