The Cygnus Loop: a weak core-collapse SN in our Galaxy

Context. The is thought to be the result of a core-collapse supernova (SN) explosion in the cavity formed by the wind of the progenitor star. Since then the shock has run through the low-density cavity, hit the cavity wall, and it is now running into a denser environment.
Aims: We test the consistency of the global parameters of the remnant (as derived at the cavity-cloud interface) with the observational scenario in the north-east (NE) sector of the remnant.
Methods: The test is performed with the help of a time-dependent spherically-symmetric hydrodynamical (HD) code using a smooth density distribution at the cavity-cloud interface.
Results: When the shock hits the wall of the cavity, the reflected perturbation is found not to be a shock wave but a strong compression wave. The reflected wave heats up the cavity at temperatures higher than those observed in the X-rays. We also find an outwardly decreasing temperature as observed in X-rays, but over a narrower radial interval. After crossing the wall of the cavity, the shock velocity in the cloud is not steady. Nonetheless, we find that the steady-state assumption usually made to fit the line emission of Balmer-dominated non-radiative filaments (NRFs) can be rather accurate (shock velocity variations <3%) if the integration time of the post-shock structure is shorter than ~200 y, the shock is not too close to the wall and the cloud was not shocked more than ~1100 yr ago.
Conclusions: We propose a revision of the parameters of the cavity-wall scenario, assuming as a constraint the approximate steadiness of the shock velocity in the cloud. With the revised set of parameters, the values of the temperature in the hot cavity are in closer agreement with observations. At the adopted distance of 540 pc, we find an explosion energy E0 ≃ 6-8 × 1049 erg, consistent with previous determinations of E0 once scaled to the adopted distance. We also determine lower and upper limits of 0.1 and 2.6 × 1050 erg. This very low value of E0 suggests an electron-capture explosion of an ~8-10 M☉ progenitor, and makes the SN of the Cygnus Loop the weakest known core-collapse SN in the Galaxy. 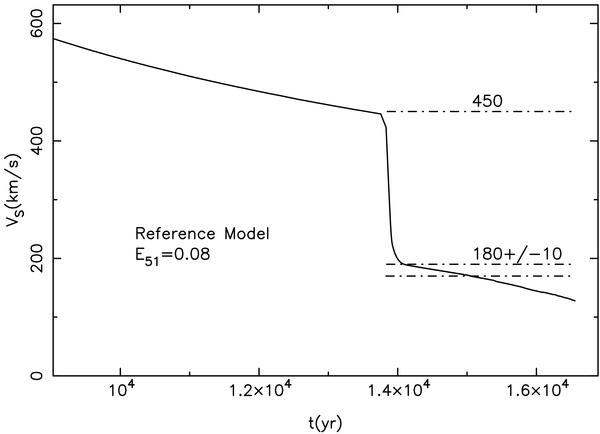