A much lower density for the transiting extrasolar planet WASP-7

We present the first high-precision photometry of the transiting extrasolar planetary system WASP-7, obtained using telescope defocussing techniques and reaching a scatter of 0.68 mmag per point. We find that the transit depth is greater and that the host star is more evolved than previously thought. The planet has a significantly larger radius (1.330 ± 0.093 RJup versus ; RJup) and much lower density (0.41 ± 0.10 ρJup versus ; ρJup) and surface gravity (13.4 ± 2.6 m s-2 versus ; m s-2) than previous measurements showed. Based on the revised properties it is no longer an outlier in planetary mass-radius and period-gravity diagrams. We also obtain a more precise transit ephemeris for the WASP-7 system.

Based on data collected by MiNDSTEp with the Danish 1.54 m telescope at the ESO La Silla Observatory.Lightcurves data is only available in electronic form at the CDS via anonymous ftp to cdsarc.u-strasbg.fr (130.79.128.5) or via http://cdsarc.u-strasbg.fr/viz-bin/qcat?J/A+A/527/A8 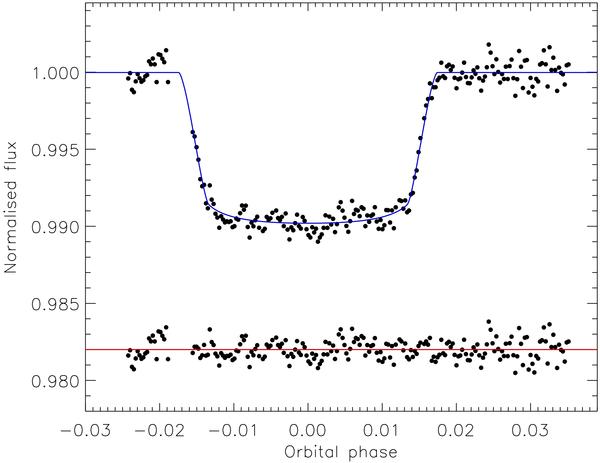