Mass loss of red supergiants (RSG) is important for the evolution of massive stars, but is not fully explained. Several empirical prescriptions have been proposed, trying to express the mass-loss rate (dot M) as a function of fundamental stellar parameters (mass, luminosity, effective temperature). Our goal is to test whether the de Jager et al. (1988, A&AS, 72, 259) prescription, which is used in some stellar evolution models, is still valid in view of more recent mass-loss determinations. By considering 40 Galactic RSGs with an infrared excess and an IRAS 60-μm flux larger than 2 Jy, and assuming a gas-to-dust mass ratio of 200, we find that the de Jager rate agrees within a factor 4 with most dot M estimates based on the 60-μm signal. It also agrees with six of the only eight Galactic RSGs for which dot M can be measured more directly through observations of the circumstellar gas. The two objects that do not follow the de Jager prescription (by an order of magnitude) are μ Cep and NML Cyg. We also considered the RSGs of the Magellanic Clouds. Thanks to the results of previous research, we find that the RSGs of the Small Magellanic Cloud have mass-loss rates consistent with the de Jager rate scaled by (Z/Z⊙)α, where Z is the metallicity and α is 0.7. The situation is less clear for the RSGs of the Large Magellanic Cloud. In particular, for L > 1.6 × 105 L⊙, one finds numerous RSGs (except WOH-G64) with dot M significantly smaller than the de Jager rate and indicating that dot M would no longer increase with L. Before this odd situation is confirmed through further analyses of LMC RSGs, we suggest to keep the de Jager prescription unchanged at solar metallicity in the stellar evolutionary models and to apply a (Z/Z⊙)0.7 dependence. 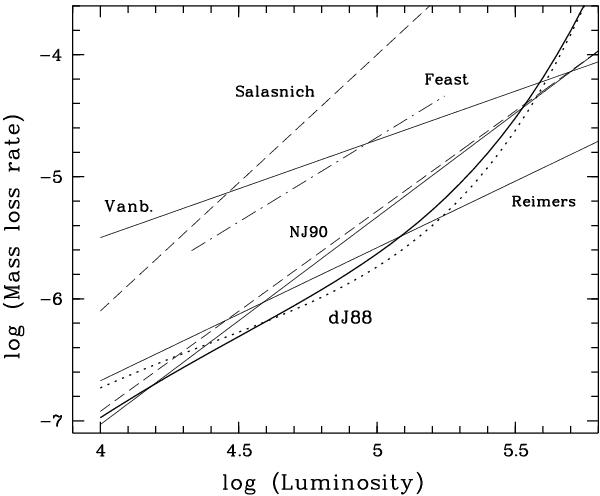