The formation of a thick disk through the heating of a thin disk: Agreement with orbital eccentricities of stars in the solar neighborhood

We study the distribution of orbital eccentricities of stars in thick disks generated by the heating of a pre-existing thin stellar disk through a minor merger (mass ratio 1:10), using N-body/SPH numerical simulations of interactions that span a range of gas fractions in the primary disk and initial orbital configurations. The resulting eccentricity distributions have an approximately triangular shape, with a peak at 0.2-0.35, and a relatively smooth decline towards higher values. Stars originally in the satellite galaxy tend to have higher eccentricities (on average from e = 0.45 to e = 0.75), which is in general agreement with the models of Sales and collaborators, although in detail we find fewer stars with extreme values and no evidence of their secondary peak around e = 0.8. The absence of this high-eccentricity feature results in a distribution that qualitatively matches the observations. Moreover, the increase in the orbital eccentricities of stars in the solar neighborhood with vertical distance from the Galactic mid-plane found by Dierickx and collaborators can be qualitatively reproduced by our models, but only if the satellite is accreted onto a direct orbit. We thus speculate that if minor mergers were the dominant means of forming the Milky Way thick disk, the primary mechanism should be merging with satellite(s) on direct orbits. 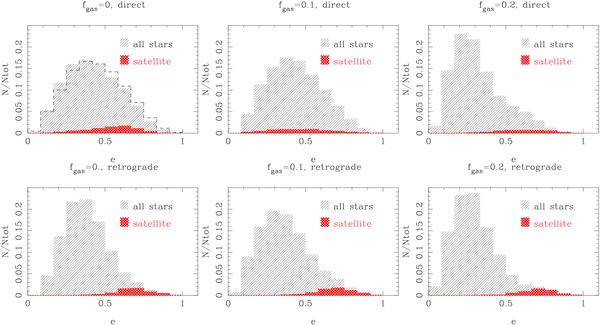