We present a 4-planet Keplerian fit for the radial velocity curve of the F8V star υ Andromeda, indicating the presence of a fourth planet in the system. We detect an additional fifth coherent signal in the radial velocity curve which we attribute to stellar activity. The discovery of a new planet around υ Andromedae makes this system the fifth to contain, at least, four planets. These four planets have minimum masses of 0.69, 1.98, 4.13 and 1.06 MJup and orbital periods of 4.62, 241.26, 1276.46 and 3848.9 days, respectively. We have numerically integrated the orbital solution for these four planets and find that the system is stable for at least 10 Myr. The orbit of the fourth planet coincides with an island of stability reported by Rivera & Haghighipour (2007, MNRAS, 374, 599). We find that the characteristics of the new fourth planet are very similar to those of Jupiter and that the planets in this system have very strong interactions with each other. As previously found, υ And-b and υ And-c are in apsidal alignment, while the orbit of the new planet (υ And-e) is close to an external 3:1 resonance with υ And-c. 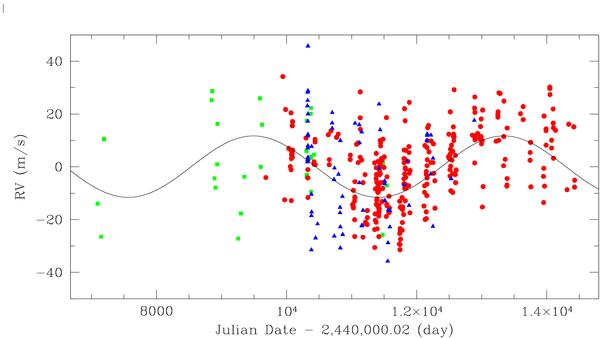