The mass ratio and initial mass functions in spectroscopic binaries

Context. Spectroscopic binaries are important in studies of binary star-formation, since original information linked to the forming stars, such as the mass ratio, can be kept in the system and observationally retrieved.
Aims: We aim to derive the more probable mass ratio distributions, to test a possible Initial Mass Functions acting on the formation of spectroscopic binaries, and to derive the value of q0, the minimal mass ratio for which both binary components are simultaneously in the main sequence.
Methods: The sample has 249 systems, selected from the Ninth Catalogue of Spectroscopic Binaries, with selection criteria that include only those systems with periods longer than four days and magnitudes brighter than mV = 7.0, and main-sequence primaries, to avoid mass exchange. Monte Carlo simulations of observational parameters were performed. We performed simulations by comparing an observational quantity, Yobs, equal to f(m)/m1, where f(m) is the mass function, to theoretical Yth, which is a function of the system inclination (assumed to be random), and of the mass ratio q = m2/m1. We considered a minimal mass ratio q0, which is the limiting condition, to ensure that both components are simultaneously on main sequence, avoiding evolutionary effects leading to mass exchange and loss of information on the original masses. Calculations were done using several q0 values. The form of the distribution of mass ratios was studied by simulations of Y, involving several functions, with slopes which are increasing, decreasing, constant, or bimodal. Other simulations were done by the generation of stars following several initial mass function laws. We combined pairs of stars generated from different IMFs, assuming that binaries arise from the pairing of stars simultaneously formed. In this case, several values of q0 were also used in the input equations.
Results: Our results indicate that decreasing q distributions match better with observations and also that a unique IMF gives better fits to observations than a composite IMF, with a slope around 1.4, rather than the widely used 2.35 slope. Values of q0 tend to be lower than what is suggested by previous studies, which point to q0 around 0.2; all simulations suggest that q0 values as low as 0.08 produce the best fits to observations. 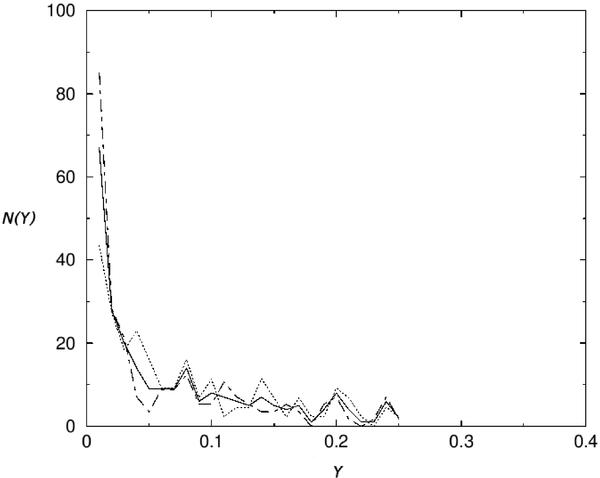