Context. Massive galaxy clusters at intermediate redshifts act as gravitational lenses that can magnify supernovae (SNe) occurring in background galaxies.
Aims: We assess the possibility of using lensed SNe to constraint the mass models of galaxy clusters and the Hubble parameter at high redshift.
Methods: Owing to the standard candle nature of Type Ia supernovae (SNe Ia), observational information on the lensing magnification by an intervening galaxy cluster can be used to constrain the model for the cluster mass distribution. A statistical analysis using parametric cluster models was performed to investigate the possible improvements provided by lensed SNe Ia to the analysis of the accurately modeled galaxy cluster A1689 and the less well-modeled cluster A2204. Time delay measurements obtained from SNe lensed by accurately modeled galaxy clusters can be used to measure the Hubble parameter. For a survey of A1689, we estimate the expected rates of detectable SNe Ia and multiply imaged SNe.
Results: The velocity dispersion and core radius of the main cluster potential follow strong correlations with the predicted magnifications and can therefore be constrained by observations of SNe Ia in background galaxies. This technique proves especially powerful for galaxy clusters with only a few known multiple image systems. The main uncertainty in measurements of the Hubble parameter from the time delay of strongly lensed SNe is caused by cluster model uncertainties. For the extremely well-modeled cluster A1689, a single time delay measurement could be used to determine the Hubble parameter with a precision of ~10%.
Conclusions: Observations of SNe Ia behind galaxy clusters can be used to improve the mass modeling of the large-scale component of galaxy clusters and thus the distribution of dark matter. Time delays from SNe strongly lensed by accurately modeled galaxy clusters can be used to measure the Hubble constant at high redshifts.

Based on observations made with the NASA/ESA Hubble Space Telescope, obtained from the Data Archive at the Space Telescope Science Institute, which is operated by the Association of Universities for Research in Astronomy, Inc., under NASA contract NAS 5-26555. These observations are associated with programs # 9134, 9289 and 10150. 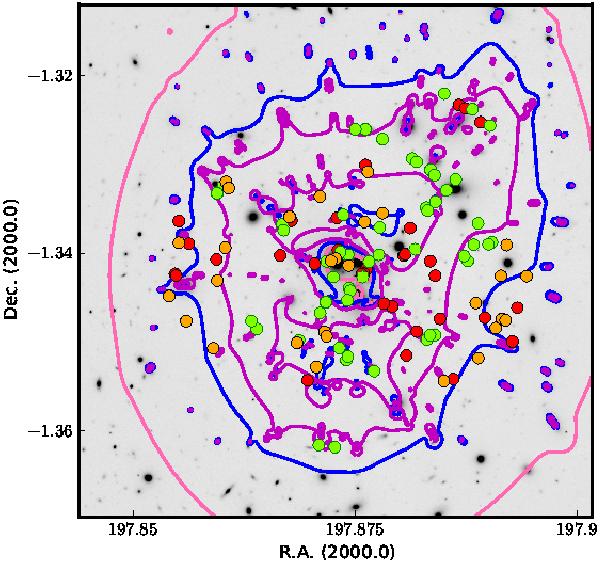