Aims: We introduce the Chromospheric Telescope (ChroTel) at the Observatorio del Teide in Izaña on Tenerife as a new multi-wavelength imaging telescope for full-disk synoptic observations of the solar chromosphere. We describe the design of the instrument and summarize its performance during the first one and a half years of operation. We present a method to derive line-of-sight velocity maps of the full solar disk from filtergrams taken in and near the He i infrared line at 10 830 Å.
Methods: ChroTel observations are conducted using Lyot-type filters for the chromospheric lines of Ca ii K, Hα, and He i 10 830 Å. The instrument operates autonomically and gathers imaging data in all three channels with a cadence of down to one minute. The use of a tunable filter for the He i line allows us to determine line-shifts by calibrating the line-of-sight velocity maps derived from the filtergram intensities with spectrographic data from the Tenerife Infrared Polarimeter at high spatial and spectral resolution.
Results: The robotic operation and automated data reduction have proven to operate reliably in the first one and and half years. The achieved spatial resolution of the data is close to the theoretical limit of 2 arcsec in Hα and Ca ii K and 3 arcsec in He i. Line-of-sight velocities in He i can be determined with a precision of better than 3-4 km s-1 when co-temporal spectrographic maps are available for calibration.
Conclusions: ChroTel offers a unique combination of imaging in the most important chromospheric lines, along with the possibility to determine line-of-sight velocities in one of the lines. This is of interest for scientific investigations of large-scale structures in the solar chromosphere, as well as for context imaging of high-resolution solar observations. 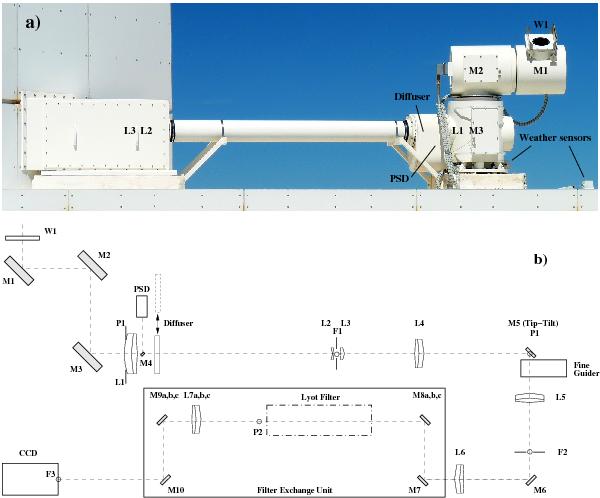