Context. We present high-precision time-series photometry of the classical δ Scuti star HD 144277 obtained with the MOST (Microvariability and Oscillations of STars) satellite in two consecutive years. The observed regular frequency patterns are investigated asteroseismologically.
Aims: HD 144277 is a hot A-type star that is located on the blue border of the classical instability strip. While we mostly observe low radial order modes in classical δ Scuti stars, HD 144277 presents a different case. Its high observed frequencies, i.e., between 59.9 d-1 (693.9 μHz) and 71.1 d-1 (822.8 μHz), suggest higher radial orders. We examine the progression of the regular frequency spacings from the low radial order to the asymptotic frequency region.
Methods: Frequency analysis was performed using Period04 and SigSpec. The results from the MOST observing runs in 2009 and 2010 were compared to each other. The resulting frequencies were submitted to asteroseismic analysis.
Results: HD 144277 was discovered to be a δ Scuti star using the time-series photometry observed by the MOST satellite. Twelve independent pulsation frequencies lying in four distinct groups were identified. Two additional frequencies were found to be combination frequencies. The typical spacing of 3.6 d-1 corresponds to the spacing between subsequent radial and dipole modes, therefore the spacing between radial modes is twice this value, 7.2 d-1. Based on the assumption of slow rotation, we find evidence that the two radial modes are the sixth and seventh overtones, and the frequency with the highest amplitude can be identified as a dipole mode.
Conclusions: The models required to fit the observed instability range need slightly less metallicity and a moderate enhancement of the helium abundance compared to the standard chemical composition. Our asteroseismic models suggest that HD 144277 is a δ Scuti star close to the ZAMS with a mass of 1.66 M⊙.

Based on data from the MOST satellite, a Canadian Space Agency mission, jointly operated by Microsatellite Systems Canada Inc. (MSCI), formerly part of Dynacon, Inc., the University of Toronto Institute for Aerospace Studies, and the University of British Columbia with the assistance of the University of Vienna. 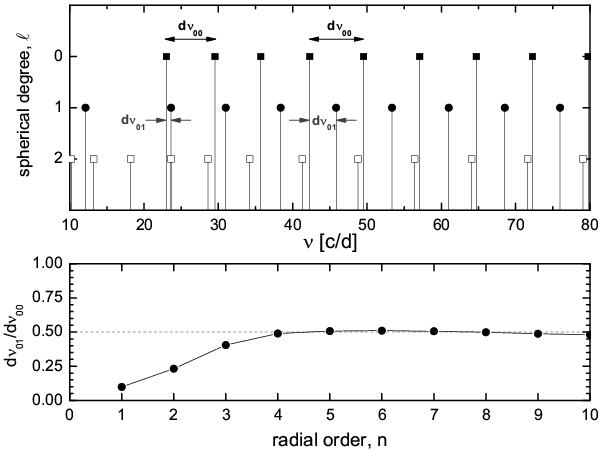