Two phase, inward-then-outward migration of Jupiter and Saturn in the gaseous solar nebula

Context. It has recently been shown that the terrestrial planets and asteroid belt can be reproduced if the giant planets underwent an inward-then-outward migration (the "Grand Tack"; Walsh and collaborators). Inward migration occurs when Jupiter opens a gap and type II migrates inward. The planets "tack" and migrate outward when Saturn reaches the gap-opening mass and is caught in the 3:2 resonance with Jupiter.
Aims: The aim is to test the viability of the Grand Tack model and to study the dynamical evolution of Jupiter and Saturn during their growth from 10 M⊕ cores.
Methods: We have performed numerical simulations using a grid-based hydrodynamical code. Most of our simulations assume an isothermal equation of state for the disk but a subset use a fully-radiative version of the code.
Results: For an isothermal disk the two phase migration of Jupiter and Saturn is very robust and independent of the mass-growth history of these planets provided the disk is cool enough. For a radiative disk we find some outcomes with two phase migrations and others with more complicated behavior. We construct a simple, 1D model of an evolving viscous disk to calculate the evolution of the disk's radiative properties: the disk transitions from radiative to isothermal from its outermost regions inward in time.
Conclusions: We show that a two-phase migration is a natural outcome at late times even under the limiting assumption that isothermal conditions are required. Thus, our simulations provide strong support for the Grand Tack scenario. 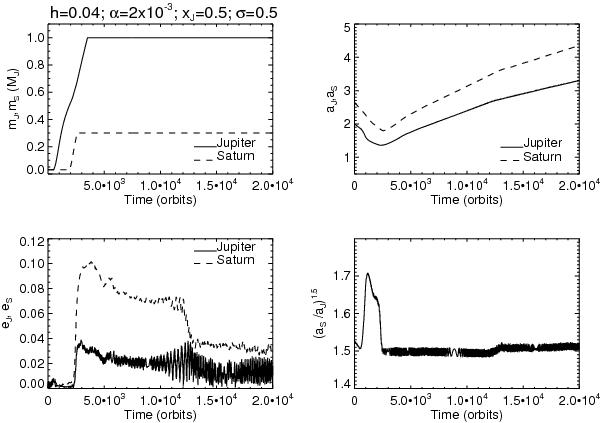