Context. The presence of highly eccentric extrasolar planets in binary stellar systems suggests that the Kozai effect has played an important role in shaping their dynamical architectures. However, the formation of planets in inclined binary systems poses a considerable theoretical challenge, as orbital excitation due to the Kozai resonance implies destructive, high-velocity collisions among planetesimals.
Aims: To resolve the apparent difficulties posed by Kozai resonance, we seek to identify the primary physical processes responsible for inhibiting the action of Kozai cycles in protoplanetary disks. Subsequently, we seek to understand how newly-formed planetary systems transition to their observed, Kozai-dominated dynamical states.
Methods: The main focus of this study is on understanding the important mechanisms at play. Thus, we rely primarily on analytical perturbation theory in our calculations. Where the analytical approach fails to suffice, we perform numerical N-body experiments.
Results: We find that theoretical difficulties in planet formation arising from the presence of a distant (tilde{a ∼ 1000} AU) companion star, posed by the Kozai effect and other secular perturbations, can be overcome by a proper account of gravitational interactions within the protoplanetary disk. In particular, fast apsidal recession induced by disk self-gravity tends to erase the Kozai effect, and ensure that the disk's unwarped, rigid structure is maintained. Subsequently, once a planetary system has formed, the Kozai effect can continue to be wiped out as a result of apsidal precession, arising from planet-planet interactions. However, if such a system undergoes a dynamical instability, its architecture may change in such a way that the Kozai effect becomes operative.
Conclusions: The results presented here suggest that planetary formation in highly inclined binary systems is not stalled by perturbations, arising from the stellar companion. Consequently, planet formation in binary stars is probably no different from that around single stars on a qualitative level. Furthermore, it is likely that systems where the Kozai effect operates, underwent a transient phase of dynamical instability in the past. 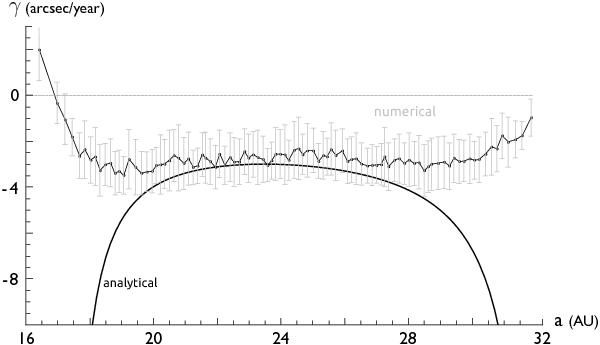