How do galaxies acquire their mass?

We study the growth of galaxy masses, via gas accretion and galaxy mergers. We introduce a toy model that describes (in a single equation) how much baryonic mass is accreted and retained into galaxies as a function of halo mass and redshift. In our model, the evolution of the baryons differs from that of the dark matter because 1) gravitational shock heating and AGN jets suppress gas accretion mainly above a critical halo mass of Mshock ~ 1012 M⊙; 2) the intergalactic medium after reionisation is too hot for accretion onto haloes with circular velocities vcirc ≲ 40 km s-1; 3) stellar feedback drives gas out of haloes, mainly those with vcirc ≲ 120 km s-1. We run our model on the merger trees of the haloes and sub-haloes of a high-resolution dark matter cosmological simulation. The galaxy mass is taken as the maximum between the mass given by the toy model and the sum of the masses of its progenitors (reduced by tidal stripping). Designed to reproduce the present-day stellar mass function of galaxies, our model matches fairly well the evolution of the cosmic stellar density. It leads to the same z = 0 relation between central galaxy stellar and halo mass as the one found by abundance matching and also as that previously measured at high mass on SDSS centrals. Our model also predicts a bimodal distribution (centrals and satellites) of stellar masses for given halo mass, in very good agreement with SDSS observations. The relative importance of mergers depends strongly on stellar mass (more than on halo mass). Massive galaxies with mstars > mcrit ~ Ωb/ΩmMshock ~ 1011 M⊙ acquire most of their final mass through mergers (mostly major and gas-poor), as expected from our model's shutdown of gas accretion at high halo masses. However, although our mass resolution should see the effects of mergers down to mstars ≃ 1010.6 h-1 M⊙, we find that mergers are rare for mstars ≲ 1011 h-1 M⊙. This is a consequence of the curvature of the stellar vs. halo mass relation set by the physical processes of our toy model and found with abundance matching. So gas accretion must be the dominant growth mechanism for intermediate and low mass galaxies, including dwarf ellipticals in clusters. The contribution of galaxy mergers terminating in haloes with mass Mhalo < Mshock (thus presumably gas-rich) to the mass buildup of galaxies is small at all masses, but accounts for the bulk of the growth of ellipticals of intermediate mass (~1010.5 h-1 M⊙), which we predict must be the typical mass of ULIRGs. 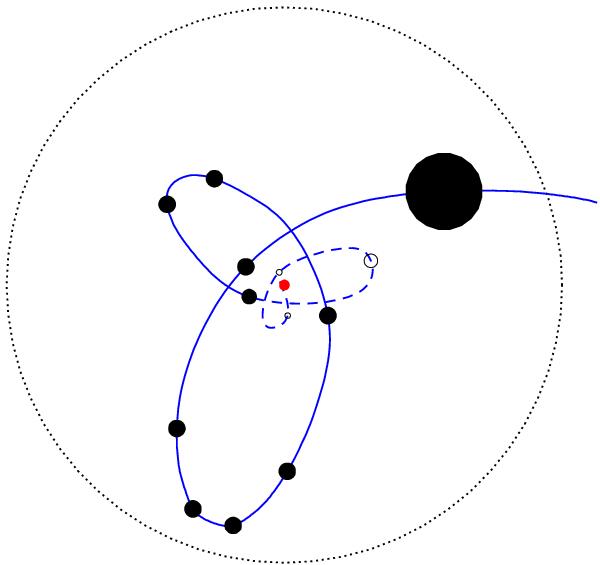