Aims: We present colour-magnitude diagrams (CMDs) of young massive star clusters in several galaxies located well beyond the Local Group. The richness of these clusters allows us to obtain large samples of post-main sequence stars and test how well the observed CMDs are reproduced by canonical stellar isochrones.
Methods: We use imaging of seven clusters in the galaxies , , , and obtained with the Advanced Camera for Surveys on board the Hubble Space Telescope and carry out PSF-fitting photometry of individual stars in the clusters. The clusters have ages in the range ~(5-50) × 106 years and masses of ~105 M⊙-106 M⊙. Although crowding prevents us from obtaining photometry in the inner regions of the clusters, we are still able to measure up to 30-100 supergiant stars in each of the richest clusters. The resulting CMDs and luminosity functions are compared with photometry of artificially generated clusters, designed to reproduce the photometric errors and completeness as realistically as possible.
Results: In agreement with previous studies, our CMDs show no clear gap between the H-burning main sequence and the He-burning supergiant stars, contrary to predictions by common stellar isochrones. In general, the isochrones also fail to match the observed number ratios of red-to-blue supergiant stars, although the difficulty of separating blue supergiants from the main sequence complicates this comparison. In several cases we observe a large spread (1-2 mag) in the luminosities of the supergiant stars that cannot be accounted for by observational errors. We find that this spread can be reproduced by including an age spread of ~(10-30) × 106 years in the models. However, age spreads cannot fully account for the observed morphology of the CMDs and other processes, such as the evolution of interacting binary stars, may also play a role.
Conclusions: Colour-magnitude diagrams can be successfully obtained for massive star clusters out to distances of at least 4-5 Mpc. Comparing such CMDs with models based on canonical isochrones we find several areas of disagreement. One interesting possibility is that an age spread of up to ~30 Myr may be present in some clusters. The data presented here may provide useful constraints on models for single and/or binary stellar evolution.

Based on observations made with the NASA/ESA Hubble Space Telescope, obtained from the data archive at the Space Telescope Science Institute. STScI is operated by the association of Universities for Research in Astronomy, Inc. under the NASA contract NAS 5-26555Tables 4-10 are only available in electronic form at the CDS via anonymous ftp to cdsarc.u-strasbg.fr (130.79.128.5) or via http://cdsarc.u-strasbg.fr/viz-bin/qcat?J/A+A/532/A147 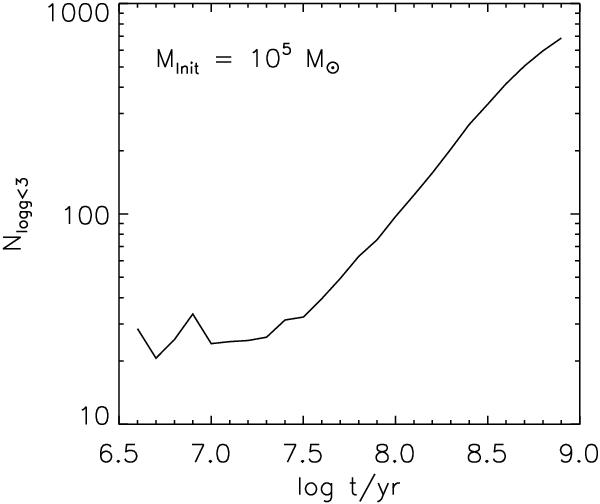