The EFIGI catalogue of 4458 nearby galaxies with morphology. II. Statistical properties along the Hubble sequence


Aims: The EFIGI catalogue of 4458 galaxies extracted from the PGC and SDSS DR4 was designed to provide a multiwavelength reference database of the morphological properties of nearby galaxies. The sample is limited in apparent diameter and densely samples all RC3 Hubble types.
Methods: We examine the statistics of the 16 EFIGI shape attributes, describing the various dynamical components, the texture, and the contamination by the environment of each galaxy. Using the redshifts from SDSS, HyperLeda, or NED for 99.53% of EFIGI galaxies, we derive estimates of absolute major isophotal diameters and the corresponding mean surface brightness in the SDSS g-band.
Results: We study the variations of the EFIGI morphological attributes with Hubble type and confirm that the visual Hubble sequence is a decreasing sequence of bulge-to-total ratio and an increasing sequence of disk contribution to the total galaxy flux. There is, nevertheless, a total spread of approximately five types for a given bulge-to-total ratio, because the Hubble sequence is primarily based on the strength and pitch angle of the spiral arms, independently from the bulge-to-total ratio. A steep decrease in the presence of dust from Sb to Sbc-Sc types appears to produce the grand spiral design of the Sc galaxies. In contrast, the scattered and giant HII regions show different strength variation patterns, with peaks for types Scd and Sm; hence, they do not appear to directly participate in the establishment of the visual Hubble sequence. The distortions from a symmetric profile also incidentally increase along the sequence. Bars and inner rings are frequent and occur in 41% and 25% of the disk galaxies respectively. Outer rings are half as frequent than inner rings, and outer pseudo-rings occur in 11% of barred galaxies. Finally, we find a smooth decrease in mean surface brightness and intrinsic size along the Hubble sequence. The largest galaxies are cD, ellipticals and Sab-Sbc intermediate spirals (20-50 kpc in D25), whereas Sd and later spirals are nearly half as big. S0 are intermediate in size (15-35 kpc in D25), and irregulars, compact and dwarf ellipticals are confirmed as small objects (5-15 kpc in D25). Dwarf spiral galaxies of type Sa to Scd are rare in the EFIGI catalogue, we only find two such objects.
Conclusions: The EFIGI sample provides us for the first time with a quantitative description of the visual Hubble sequence in terms of the specific morphological features of the various galaxy types. 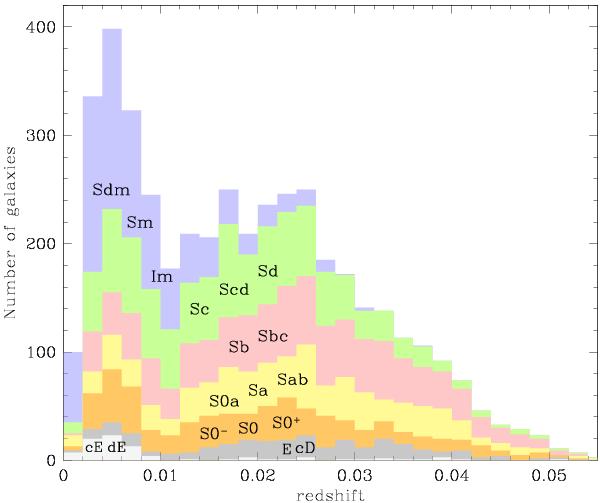