The EFIGI catalogue of 4458 nearby galaxies with detailed morphology

Context. Now that modern imaging surveys have produced large databases of galaxy images advanced morphological studies have become possible. This has driven the need for well-defined calibration samples.
Aims: We present the EFIGI catalogue, a multi-wavelength database specifically designed to densely sample all Hubble types. The catalogue merges data from standard surveys and catalogues (Principal Galaxy Catalogue, Sloan Digital Sky Survey, Value-Added Galaxy Catalogue, HyperLeda, and the NASA Extragalactic Database) and provides detailed morphological information.
Methods: Imaging data were obtained from the SDSS DR4 in the u, g, r, i, and z bands for a sample of 4458 PGC galaxies, whereas photometric and spectroscopic data were obtained from the SDSS DR5 catalogue. Point-spread function models were derived in all five bands. Composite colour images of all objects were visually examined by a group of astronomers, and galaxies were assigned positions in the Hubble sequence and classified according to 16 morphological attributes describing their structure, texture, environment and appearance on a five-level scale.
Results: The EFIGI Hubble sequence is in remarkably good agreement with the RC3 Revised Hubble Sequence. The main characteristics and reliability of the catalogue are examined, including photometric completeness, type mix, systematic trends and correlations.
Conclusions: The final EFIGI database is a large sub-sample of the local Universe which densely samples Sd, Sdm, Sm and Im types compared to magnitude-limited catalogues. We estimate that the photometric catalogue is more than ≈ 80% complete for galaxies with 10< g < 14. More than 99.5% of EFIGI galaxies have known redshifts in the HyperLeda and NED databases. 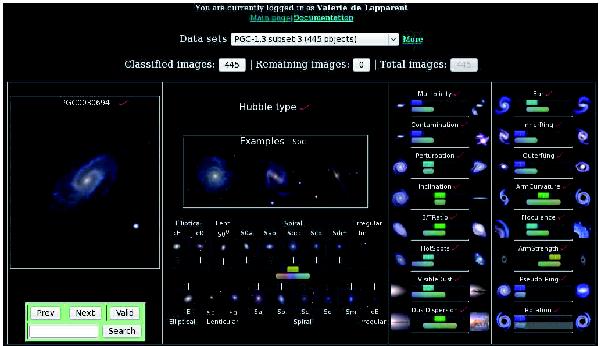