Context. Although transit spectroscopy is a very powerful method for studying the composition, thermal properties, and dynamics of exoplanet atmospheres, only a few transiting terrestrial exoplanets will be close enough to allow significant transit spectroscopy with the current and forthcoming generations of instruments. Thermal phase curves (variations in the apparent infrared emission of the planet with its orbital phase) have been observed for hot Jupiters in both transiting and nontransiting configurations, and have been used to put constraints on the temperature distribution and atmospheric circulation. This method could be applied to hot terrestrial exoplanets.
Aims: We study the wavelength and phase changes of the thermal emission of a tidally-locked terrestrial planet as atmospheric pressure increases. We address the observability of these multiband phase curves and the ability to use them to detect atmospheric constituents.
Methods: We used a 3D climate model (GCM) to simulate the CO2 atmosphere of a terrestrial planet on an 8-day orbit around an M 3 dwarf and its apparent infrared emission as a function of its orbital phase. We estimated the signal to photon-noise ratio in narrow bands between 2.5 and 20 μm for a 10 pc target observed with a 6 m and a 1.5 m telescope (respectively the sizes of JWST and EChO).
Results: Atmospheric absorption bands produce associated signatures in what we call the variation spectrum. Atmospheric windows probing the near surface atmospheric layers are needed to produce large, observable phase-curve amplitudes. The number and transparency of these windows, hence the observability of the phase curves and the molecular signatures, decreases with increasing pressure. Planets with no atmosphere produce large variations and can be easily distinguished from dense absorbing atmospheres.
Conclusions: Photon-noise limited spectro-photometry of nearby systems could allow us to detect and characterize the atmosphere of nontransiting terrestrial planets known from radial velocity surveys. Two obvious impediments to these types of observations are the required photometric sensitivity (10-5) over the duration of at least one orbit (8-days in the studied case) and the intrinsic stellar variability. However, overcoming these obstacles would give access to one order of magnitude more targets than does transit spectroscopy. 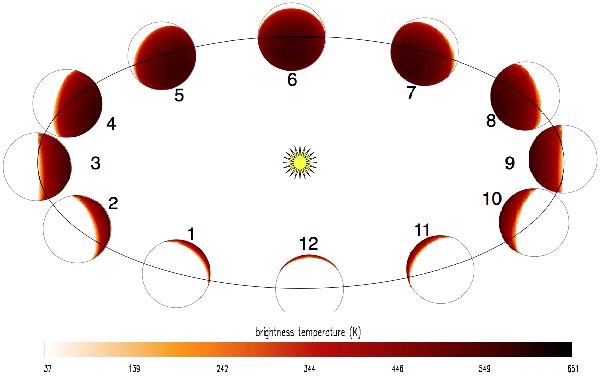