We present observations proving the close binary nature of the central stars belonging to the planetary nebulae (PNe) NGC 6326 and NGC 6778. Photometric monitoring reveals irradiated lightcurves with orbital periods of 0.372 and 0.1534 days, respectively, constituting firm evidence that they passed through a common-envelope (CE) phase. Unlike most surveys for close binary central stars (CSPN) however, the binary nature of NGC 6326 was first revealed spectroscopically and only later did photometry obtain an orbital period. Gemini South observations revealed a large 160 km s-1 shift between the nebula and emission lines of C III and N III well known to originate from irradiated atmospheres of main-sequence companions. These so-called weak emission lines are fairly common in PNe and measurement of their radial velocity shifts in spectroscopic surveys could facilitate the construction of a statistically significant sample of post-CE nebulae. There is growing evidence that this process can be further accelerated by pre-selecting nebulae with traits of known post-CE nebulae. Both NGC 6326 and NGC 6778 were selected for their rich attribution of low-ionisation filaments and collimated outflows, thereby strengthening the connection between these traits and post-CE CSPN.

Based on observations made with Gemini South under program GS-2009A-Q-35, the South African Astronomical Observatory 1.9 m telescope, the Flemish Mercator telescope of the Observatoria del Roque de Los Muchachos, and the Very Large Telescope at Paranal Observatory under program 085.D-0629(A). 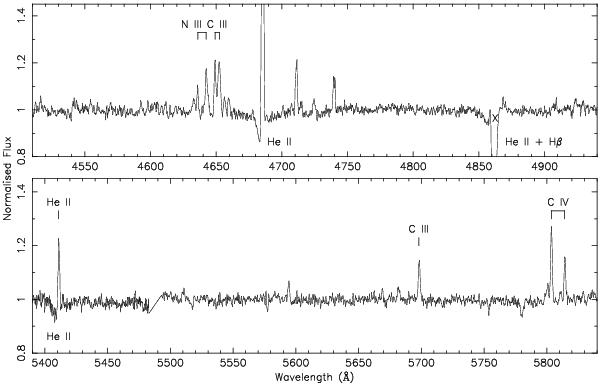