The two edge-on galaxies NGC 891 and NGC 7814 are representative of two extreme morphologies: the former is disk-dominated while the latter is almost entirely bulge-dominated. It has been argued that since the two galaxies, which are optically so different, have similar rotation curves their total mass distributions cannot be related in any way to the light distributions. This would lead to the conclusion that dark matter is the dominating component of the mass. We have derived new rotation curves from recent, high-sensitivity H I observations and have found that the shapes of the rotation curves are significantly different for the two galaxies. They indicate that in NGC 7814 the mass is more concentrated to the centre as compared to NGC 891. This reflects the distribution of light which is more centrally concentrated in NGC 7814 than in NGC 891. Mass and light do seem to be closely related. This is confirmed by the analysis of the rotation curves in mass components: solutions close to the maximum light (bulge + disk) do provide excellent fits. In NGC 891 bulge and disk can explain the rotation curve without any need for dark matter out to ~15 kpc. In NGC 7814 the bulge dominates in the inner parts; further out the rotation curve is well reproduced by a maximum disk but its M/L ratio is excessively high. A substantial dark matter contribution, closely coupled to the luminous component, seems, therefore, necessary. 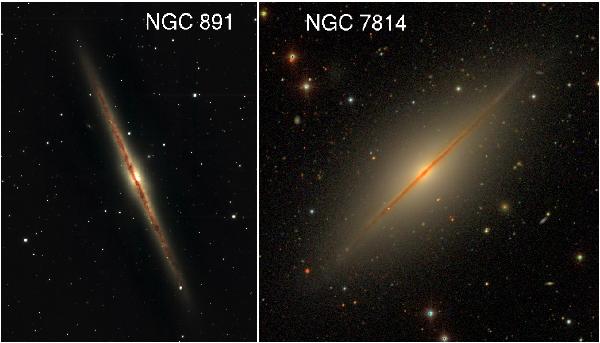