Most work on high-mass star formation has focused on observations of young massive stars in protoclusters. Very little is known about the preceding stage. Here, we present a new high-resolution study of pre-protocluster regions in tracers exclusively probing the coldest and dense gas (NH2D). The two target regions and () are drawn from the SCAMPS project, which searches for pre-protoclusters near known ultracompact Hii regions. We used our data to constrain the chemical, thermal, kinematic, and physical conditions (i.e., densities) in G29.96e and G35.20w. NH3, NH2D, HCO + , and continuum emission were mapped using the VLA, PdBI, and BIMA. In particular, NH2D is a unique tracer of cold, precluster gas at high densities, while NH3 traces both the cold and warm gas of modest-to-high densities. In G29.96e, Spitzer images reveal two massive filaments, one of them in extinction (infrared dark cloud). Dust and line observations reveal fragmentation into multiple massive cores strung along filamentary structures. Most of these are cold (<20 K), dense (>105 cm-3) and highly deuterated ([NH2D/NH3] > 6%). In particular, we observe very low line widths in NH2D (FWHM ≲ 1 km s-1). These are very narrow lines that are unexpected towards a region forming massive stars. Only one core in the center of each filament appears to be forming massive stars (identified by the presence of masers and massive outflows); however, it appears that only a few such stars are currently forming (i.e., just a single Spitzer source per region). These multi-wavelength, high-resolution observations of high-mass pre-protocluster regions show that the target regions are characterized by (i) turbulent Jeans fragmentation of massive clumps into cores (from a Jeans analysis); (ii) cores and clumps that are "over-bound/subvirial", i.e. turbulence is too weak to support them against collapse, meaning that (iii) some models of monolithic cloud collapse are quantitatively inconsistent with data; (iv) accretion from the core onto a massive star, which can (for observed core sizes and velocities) be sustained by accretion of envelope material onto the core, suggesting that (similar to competitive accretion scenarios) the mass reservoir for star formation is not necessarily limited to the natal core; (v) high deuteration ratios ([NH2D/NH3] > 6%), which make the above discoveries possible; (vi) and the destruction of NH2D toward embedded stars.

Fits images of PdBI continuum observations associated with Figs. 1-4 are only available at the CDS via anonymous ftp to cdsarc.u-strasbg.fr (130.79.128.5) or via http://cdsarc.u-strasbg.fr/viz-bin/qcat?J/A+A/530/A118Based on observations carried out with the IRAM Plateau de Bure Interferometer. IRAM is supported by INSU/CNRS (France), MPG (Germany) and IGN (Spain). 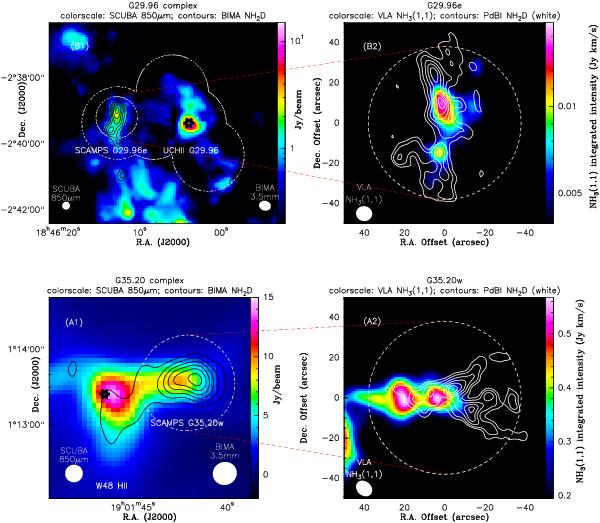