There exists strong circumstantial evidence from their eccentric orbits that most of the known extra-solar planetary systems are the survivors of violent dynamical instabilities. Here we explore the effect of giant planet instabilities on the formation and survival of terrestrial planets. We numerically simulate the evolution of planetary systems around Sun-like stars that include three components: (i) an inner disk of planetesimals and planetary embryos; (ii) three giant planets at Jupiter-Saturn distances; and (iii) an outer disk of planetesimals comparable to estimates of the primitive Kuiper belt. We calculate the dust production and spectral energy distribution of each system by assuming that each planetesimal particle represents an ensemble of smaller bodies in collisional equilibrium. Our main result is a strong correlation between the evolution of the inner and outer parts of planetary systems, i.e. between the presence of terrestrial planets and debris disks. Strong giant planet instabilities - that produce very eccentric surviving planets - destroy all rocky material in the system, including fully-formed terrestrial planets if the instabilities occur late, and also destroy the icy planetesimal population. Stable or weakly unstable systems allow terrestrial planets to accrete in their inner regions and significant dust to be produced in their outer regions, detectable at mid-infrared wavelengths as debris disks. Stars older than ~100 Myr with bright cold dust emission (in particular at λ ~ 70 μm) signpost dynamically calm environments that were conducive to efficient terrestrial accretion. Such emission is present around ~16% of billion-year old Solar-type stars. Our simulations yield numerous secondary results: 1) the typical eccentricities of as-yet undetected terrestrial planets are ~0.1 but there exists a novel class of terrestrial planet system whose single planet undergoes large amplitude oscillations in orbital eccentricity and inclination; 2) by scaling our systems to match the observed semimajor axis distribution of giant exoplanets, we predict that terrestrial exoplanets in the same systems should be a few times more abundant at ~0.5 AU than giant or terrestrial exoplanets at 1 AU; 3) the Solar System appears to be unusual in terms of its combination of a rich terrestrial planet system and a low dust content. This may be explained by the weak, outward-directed instability that is thought to have caused the late heavy bombardment.

The movie associated to Fig. 2 is available in electronic form at http://www.aanda.org 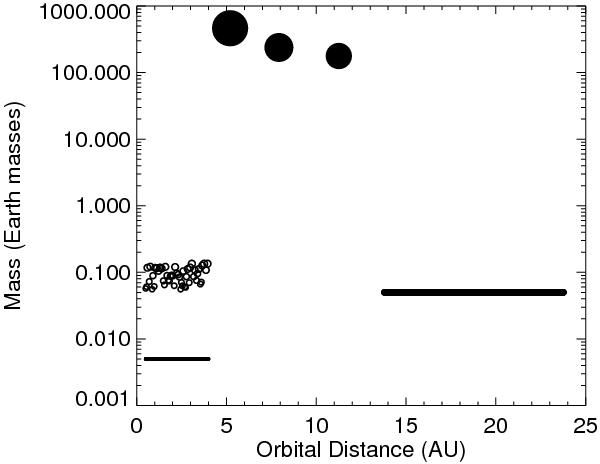