Hot subdwarf B stars (sdBs) in close binary systems are assumed to be formed via common envelope ejection. According to theoretical models, the amount of energy and angular momentum deposited in the common envelope scales with the mass of the companion. That low mass companions near or below the core hydrogen-burning limit are able to trigger the ejection of this envelope is well known. The currently known systems have very short periods ≃0.1-0.3 d. Here we report the discovery of a low mass companion (M2 > 0.14 M⊙) orbiting the sdB star and central star of a planetary nebula EGB 5 with an orbital period of 16.5 d at a minimum separation of 23 R⊙. Its long period is only just consistent with the energy balance prescription of the common envelope. The marked difference between the short and long period systems will provide strong constraints on the common envelope phase, in particular if the masses of the sdB stars can be measured accurately. Due to selection effects, the fraction of sdBs with low mass companions and similar or longer periods may be quite high. Low mass stellar and substellar companions may therefore play a significant role for the still unclear formation of hot subdwarf stars. Furthermore, the nebula around EGB 5 may be the remnant of the ejected common envelope making this binary a unique system to study this short und poorly understood phase of binary evolution.

Based on observations at the Paranal Observatory of the European Southern Observatory for programmes No. 167.H-0407(A) and 71.D-0383(A). Based on observations collected at the Centro Astronómico Hispano Alemán (CAHA) at Calar Alto, operated jointly by the Max-Planck Institut für Astronomie and the Instituto de Astrofísica de Andalucía (CSIC). Some of the data used in this work were obtained at the William Herschel Telescope (WHT) operated by the Isaac Newton Group of Telescopes (ING). 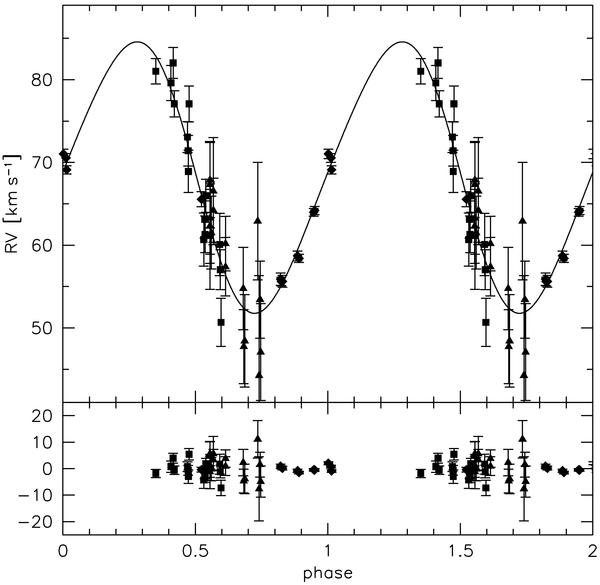