We present a SINFONI integral-field kinematical study of 33 galaxies at z ~ 3 from the AMAZE and LSD projects, which are aimed at studying metallicity and dynamics of high-redshift galaxies. The number of galaxies analyzed in this paper constitutes a significant improvement over existing data in the literature, and this is the first time that a dynamical analysis is obtained for a relatively large sample of galaxies at z ~ 3. Eleven galaxies show ordered rotational motions (~30% of the sample). In these cases we estimate dynamical masses by modeling the gas kinematics with rotating disks and exponential mass distributions. We find dynamical masses in the range 2 × 109 M⊙ - 2 × 1011 M⊙ with a mean value of ~ 2 × 1010 M⊙. By comparing observed gas velocity dispersion with what is expected from models, we find that most rotating objects are dynamically "hot", with intrinsic velocity dispersions of ~ 90 km s-1. The median value of the ratio between the maximum disk rotational velocity and the intrinsic velocity dispersion for the rotating objects is 1.6, much lower than observed in local galaxies value (~10) and slightly lower than the z ~ 2 value (2-4). Finally we use the maximum rotational velocity from our modeling to build a baryonic Tully-Fisher relation at z ~ 3. Our measurements indicate that z ~ 3 galaxies have lower stellar masses (by a factor of ten on average) compared to local galaxies with the same dynamical mass. However, the large observed scatter suggests that the Tully-Fisher relation is not yet "in place" at these early cosmic ages, possibly owing to the young age of galaxies. A smaller dispersion of the Tully-Fisher relation is obtained by taking the velocity dispersion into account with the use of the S0.5 indicator, suggesting that turbulent motions might play an important dynamical role.

Based on observations collected with European Southern Observatory/Very Large Telescope (ESO/VLT) (proposals 075.A-0300, 076.A-0711 and 178.B-0838), with the Italian TNG, operated by FGG (INAF) at the Spanish Observatorio del Roque de los Muchachos, and with the Spitzer Space Telescope, operated by JPL (Caltech) under a contract with NASA. 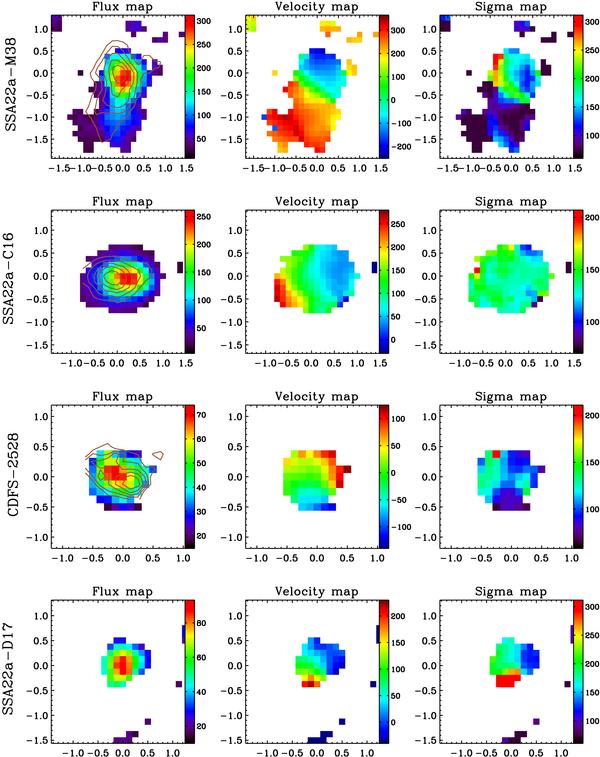