Aims: We present a study of the silicon-bearing species detected in a line-confusion limited survey towards Orion KL performed with the IRAM 30-m telescope. The analysis of the line survey is organized by families of molecules. Our aim is to derive physical and chemical conditions for each family taking all observed lines into account from all isotopologs of each species. The large number of transitions in different vibrationally excited states covered by our data, which range from 80 to 280 GHz, let us provide reliable source-average column densities (hence, isotopolog abundances and vibrational temperatures) for the detected molecules. In addition, we provide a wide study of the physical properties of the source based on the different spectral components found in the emission lines.
Methods: We modeled the lines of the detected molecules using a radiative transfer code, which permit us to choose between large velocity gradient (LVG) and local thermodynamic equilibrium (LTE) approximations depending on the physical conditions of the gas. We used appropriate collisional rates for the LVG calculations. To qualitatively investigate the origin of the SiS and SiO emissions in Orion KL we ran a grid of chemical models.
Results: For the v = 1 state of SiO, we detected the J = 2-1 line and, for the first time in this source, emission in the J = 4-3 transition, both of them showing a strong masering effect. For SiO v = 0, we detected 28SiO, 29SiO, and 30SiO; in addition, we have mapped the J = 5-4 SiO line. For SiS, we have detected the main species, 29SiS, and SiS v = 1. Unlikely other species detected in Orion KL (), the emission peak of SiS appears at a velocity of ≃ 15.5 km s-1. A study of the 5-4 SiO line around IRc2 shows this feature as an extended component that probably arises from the interaction of the outflow with the ambient cloud. We derive an SiO/SiS column density ratio of ≃ 13 in the plateau component, four times lower than the cosmic O/S ratio ≃ 48. In addition, we provide upper limits to the column density of several non-detected silicon-bearing species. The results of our chemical models show that while it is possible to reproduce SiO in the gas phase (as well as on the grains), SiS is a product of surface reactions, most likely involving direct reactions of sulfur with silicon.

Appendices are only available in electronic form at http://www.aanda.orgThis work was based on observations carried out with the IRAM 30-m telescope. IRAM is supported by INSU/CNRS (France), MPG (Germany), and IGN (Spain). 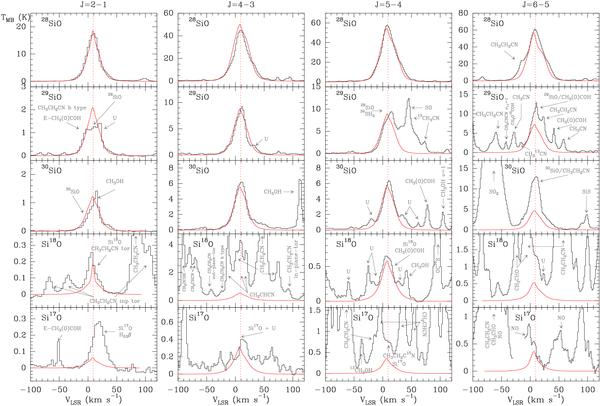