Context. The sudden optical brightening of two young stellar objects, HBC 722 and VSX J205126.1+440523, located in the North America/Pelican Nebula Complex, was announced in August 2010. Early photometric and spectroscopic observations of these objects indicated that they may belong to the FUor or EXor class of young eruptive stars. The eruptions of FUors and EXors are often explained by enhanced accretion of material from the circumstellar disk to the protostar.
Aims: In order to determine the true nature of these two objects, we started an optical and near-infrared monitoring program, and complemented our data with archival observations and data from the literature.
Methods: We plot and analyze pre-outburst and outburst spectral energy distributions (SEDs), multi-filter light curves, and color-color diagrams.
Results: The quiescent SED of HBC 722 is consistent with that of a slightly reddened normal T Tauri-type star. The source brightened monotonically in about two months, and the SED obtained during maximum brightness indicates the appearance of a hot, single-temperature blackbody. The current fading rate implies that the star will return to quiescence in about a year, which questions its classification as a bone fide FUor. The quiescent SED of VSX J205126.1+440523 looks like that of a highly embedded Class I source. The outburst of this source happened more gradually, but reached an unprecedentedly high amplitude. Its light curves showed a deep minimum two and a half months after the peak, when the object was close to its pre-outburst optical brightness. Further monitoring indicates that it is still far from being quiescent.
Conclusions: The shape of the light curves as well as the bolometric luminosities and accretion rates suggest that these objects do not fit into the classic FUor group. Although HBC 722 exhibits all spectral characteristics of a bona fide FUor, its luminosity and accretion rate is too low and its timescale is too fast compared with classical FUors. VSX J205126.1+440523 seems to be an example where quick extinction changes modulate the light curve.

Figure 1 and Tables 1-3 are only available in electronic form at http://www.aanda.org 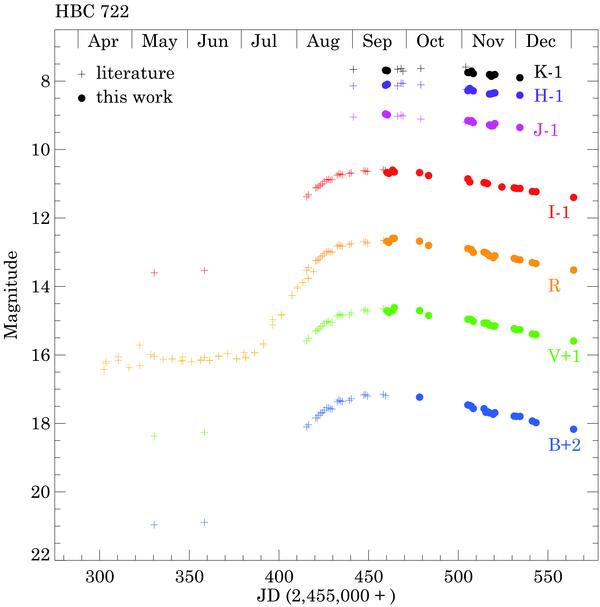