Aims: One of the goals of the XMM-Newton survey of the Small Magellanic Cloud is to study the Be/X-ray binary population. During one of our first survey observations, a bright new transient - XMMU J004814.0-732204 - was discovered.
Methods: We present the analysis of the EPIC X-ray data, together with optical observations, to investigate the spectral and temporal characteristics of XMMU J004814.0-732204.
Results: We found coherent X-ray pulsations in the EPIC data with a period of (11.86642 ± 0.00017) s. The X-ray spectrum can be modelled by an absorbed power law with an indication for a soft excess. Depending on the modelling of the soft X-ray spectrum, the photon index ranges between 0.53 and 0.66. We identify the optical counterpart as a B = 14.9 mag star that was monitored during the MACHO and OGLE-III projects. The optical light curves show regular outbursts by ~0.5 mag in B and R and up to 0.9 mag in I, which repeat on a time scale of about 1000 days. The OGLE-III optical colours of the star are consistent with an early B spectral type. An optical spectrum obtained at the 1.9 m telescope of the South African Astronomical Observatory in December 2009 shows Hα emission with an equivalent width of 3.5 ± 0.6 Å.
Conclusions: The X-ray spectrum and the detection of pulsations suggest that XMMU J004814.0-732204is a new high-mass X-ray binary pulsar in the SMC. The long term variability and the Hα emission line in the spectrum of the optical counterpart identify it as a Be/X-ray binary system. 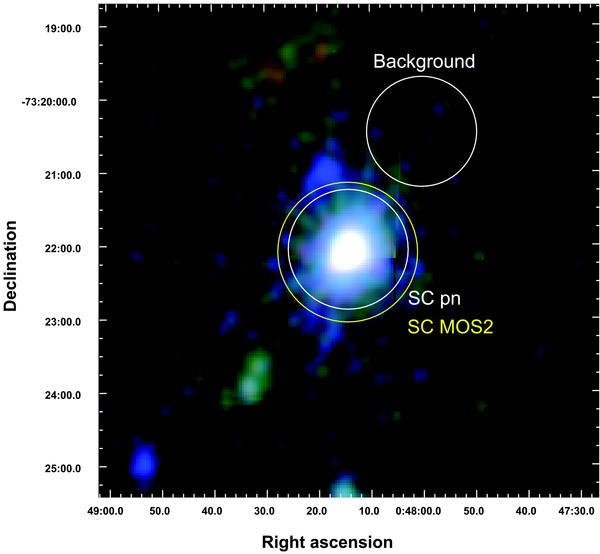