The metallicity of gamma-ray burst environments from high-energy observations

Gamma-ray bursts (GRBs) and their early afterglows ionise their circumburst material. Only high-energy spectroscopy therefore, allows examination of matter close to the burst itself. Soft X-ray absorption allows an estimate to be made of the total column density in metals. The detection of the X-ray afterglow can also be used to place a limit on the total gas column along the line of sight based on the Compton scattering opacity. Such a limit would enable, for the first time, the determination of lower limits on the metallicity in the circumburst environments of GRBs. In this paper, we determine the limits that can be placed on the total gas column density in the vicinities of GRBs based on Compton scattering. We simulate the effects of Compton scattering on a collimated beam of high-energy photons passing through a shell of high column-density material to determine the expected lightcurves, luminosities, and spectra. We compare these predictions to observations, and determine what limits can be placed on the total gas column density. The smearing out of pulses in the lightcurve from Compton scattering is not likely to be observable, and its absence does not place strong constraints on the Compton depth. However, the distribution of observed luminosities of bursts allows us to place statistical, model-dependent limits that are typically ≲ 1025 cm-2 for less luminous bursts, and as low as ~ 1024 cm-2 for the most luminous. By using the shape of the high-energy broadband spectrum, however, limits as low as ~ 5 × 1024 cm-2 can be placed on individual bursts, implying metallicity lower limits from X- and gamma-rays alone from 0 up to 0.01 Z/Z⊙. At extremely high redshifts, this limit would be at least 0.02 Z/Z⊙, enough to distinguish population III from non-primordial GRBs. 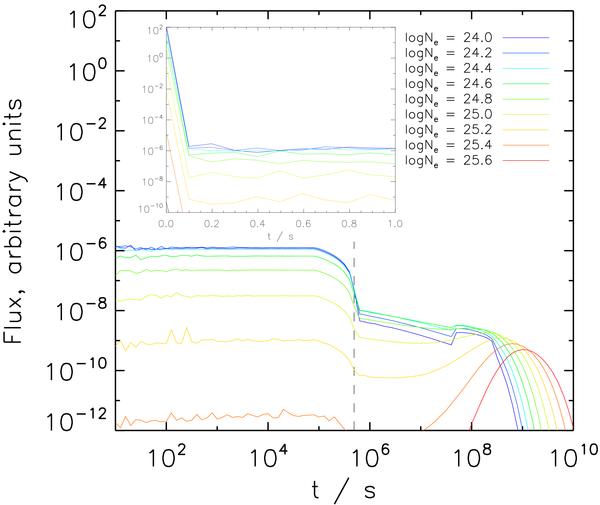