Fewer giants planets are found around M dwarfs than around more massive stars, and this dependence of planetary characteristics on the mass of the central star is an important observational diagnostic of planetary formation theories. In part to improve on those statistics, we are monitoring the radial velocities of nearby M dwarfs with the HARPS spectrograph on the ESO 3.6 m telescope. We present here the detection of giant planets around two nearby M0 dwarfs: planets, with minimum masses of respectively 5 Jupiter masses and 1 Saturn mass, orbit around Gl 676A and HIP 12961. The latter is, by over a factor of two, the most massive planet found by radial velocity monitoring of an M dwarf, but its being found around an early M-dwarf is in approximate line with the upper envelope of the planetary vs stellar mass diagram. HIP 12961 ([Fe/H] = -0.07) is slightly more metal-rich than the average solar neighborhood ([Fe/H] = -0.17), and Gl 676A ([Fe/H] = 0.18) significantly so. The two stars together therefore reinforce the growing trend for giant planets being more frequent around more metal-rich M dwarfs, and the 5 Jupiter mass Gl 676Ab being found around a metal-rich star is consistent with the expectation that the most massive planets preferentially form in disks with large condensate masses.

Based on observations made with the HARPS instrument on the ESO 3.6-m telescope at La Silla Observatory under program ID 072.C-0488Tables 3 and 4 are also available in electronic form at the CDS via anonymous ftp to cdsarc.u-strasbg.fr (130.79.128.5) or via http://cdsarc.u-strasbg.fr/cgi-bin/qcat?J/A+A/526/A141 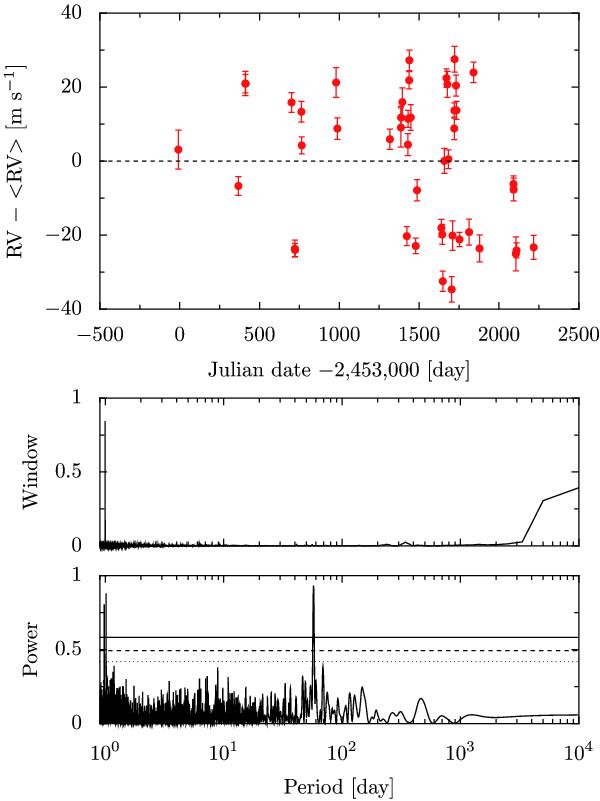