Context. To progress in the understanding of evolution of massive stars one needs to constrain the mass-loss and determine the phenomenon responsible for the ejection of matter an its reorganization in the circumstellar environment
Aims: In order to test various mass-ejection processes, we probed the geometry and kinematics of the dust and gas surrounding the A[e] supergiant HD 62623.
Methods: We used the combined high spectral and spatial resolution offered by the VLTI/AMBER instrument. Thanks to a new multi-wavelength optical/IR interferometry imaging technique, we reconstructed the first velocity-resolved images with a milliarcsecond resolution in the infrared domain.
Results: We managed to disentangle the dust and gas emission in the HD 62623 circumstellar disc. We measured the dusty disc inner rim, i.e. 6 mas, constrained the inclination angle and the position angle of the major-axis of the disc. We also measured the inner gaseous disc extension (2 mas) and probed its velocity field thanks to AMBER high spectral resolution. We find that the expansion velocity is negligible, and that Keplerian rotation is a favoured velocity field. Such a velocity field is unexpected if fast rotation of the central star alone is the main mechanism of matter ejection.
Conclusions: As the star itself seems to rotate below its breakup-up velocity, rotation cannot explain the formation of the dense equatorial disc. Moreover, as the expansion velocity is negligible, radiatively driven wind is also not a suitable explanation to explain the disc formation. Consequently, the most probable hypothesis is that the accumulation of matter in the equatorial plane is due to the presence of the spectroscopic low mass companion.

Based on CNRS Guaranteed Time Observations with ESO telescopes at the Paranal Observatory under program 084.D-0355, and on Director's Discretionary Time, 284.D-5059. Feasibility was assessed using open time, 083.C-0621. 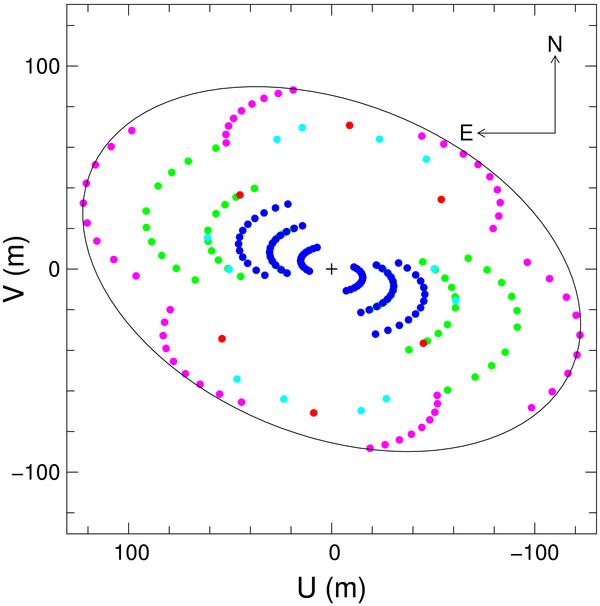