Waves in the chromosphere: observations

I review the literature on observational aspects of waves in the solar chromosphere in the first part of this contribution. High-frequency waves are invoked to build elaborate cool-star chromosphere heating theories but have not been detected decisively so far, neither as magnetic modes in network elements nor as acoustic modes in below-the-canopy internetwork regions. Three-minute upward-propagating acoustic shocks are thoroughly established through numerical simulation as the cause of intermittent bright internetwork grains, but their pistoning and their role in the low-chromosphere energy budget remain in debate. Three-minute wave interaction with magnetic canopies is a newer interest, presently progressing through numerical simulation. Three-minute umbral flashes and running penumbral waves seem a similar acoustic-shock phenomenon awaiting numerical simulation. The low-frequency network Doppler modulation remains enigmatic. In the second part, I address low-frequency ultraviolet brightness variations of the internetwork chromosphere in more detail. They contribute about half of the internetwork brightness modulation and presumably figure in cool-star basal flux. They appear to be a mixture of inverse-contrast granular overshoot at small scales and gravity-wave interference at mesogranular scales. I present TRACE evidence for the latter interpretation, and speculate that the low-frequency brightness minima map canopy heights. 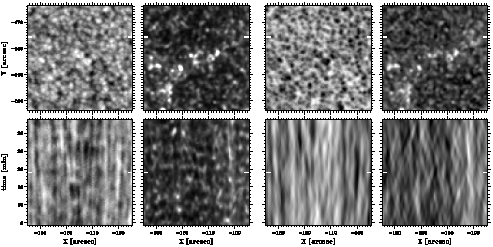