Gamma-ray emission produced by interactions between cosmic rays (CRs) and interstellar gas traces the product of their densities throughout the Milky Way. The outer Galaxy is a privileged target of investigation to separate interstellar structures seen along the line of sight. Recent observations by the Fermi Large Area Telescope (LAT) shed light on open questions of the EGRET era about the distribution of CR densities and the census of the interstellar medium. The gradient of gamma-ray emissivities measured in the outer Galaxy is significantly flatter than predictions from widely used CR propagation models given the rapid decline of putative CR sources beyond the solar circle. Large propagation volumes, with halo heights up to 20 kpc, or a flat CR source distribution are required to match the data. Other viable possibilities include non-uniform CR diffusion properties or more gas than accounted for by the radio/mm-wave data. Gamma-ray data constrain the evolution of the Xco=N(H2)/W(CO) ratio within a few kpc from the Sun. There is a significant increase by a factor 2 from nearby clouds in the Gould Belt to the local spur. No further significant variations are measured from the local spur to the Perseus spiral arm. At the level of statistical accuracy provided by the LAT data, the most important source of uncertainty, often overlooked so far, is due to the optical depth correction applied to derive the column densities of H I. Reliable determinations of the amount of atomic gas in the plane are key to better probe the properties of CRs in the Galaxy. 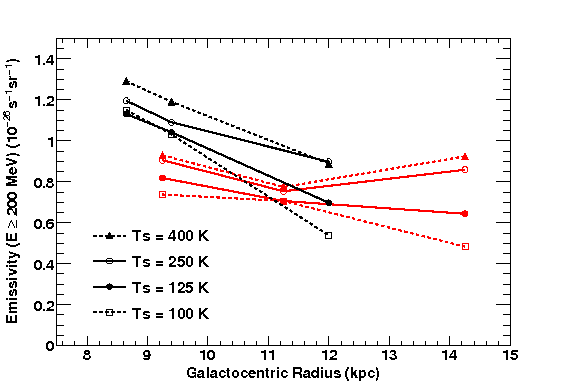