Observations of gamma-ray bursts are being used to test for a momentum dependence of the speed of photons, partly motivated by preliminary results reported in analyses of some quantum-spacetime scenarios. The relationship between time of arrival, momentum of the photon and redshift of the source which is used for these purposes assumes a "breakdown" of relativistic symmetries, meaning that it is a preferred-frame scenario which does not satisfy the Relativity Principle. The alternative hypothesis of a "deformation" of relativistic symmetries, which preserves the Relativity Principle by adopting deformed laws of relativistic transformation between observers, could not so far be tested in gamma-ray-burst observations because it was not known how to formulate it in expanding spacetimes. We here provide such a formulation, and we find that also for the symmetry-deformation scenario the analysis of gamma-ray-burst data take us very close to the desired "Planck-scale sensitivity". 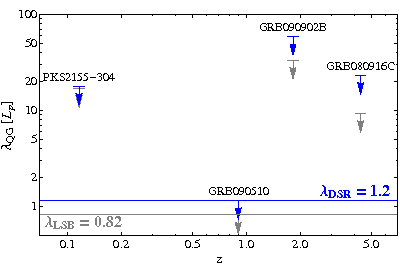