On the buildup of massive early-type galaxies at z<~1. II- The coordinated key role of wet, mixed, and dry major mergers

Hierarchical models predict that present-day massive early-type galaxies (mETGs) have finished their assembly at a quite late cosmic epoch (z~0.5), conflicting directly with galaxy mass-downsizing. In Eliche-Moral et al. (2010), we presented a semi-analytical model that predicts the increase by a factor of ~2.5 observed in the number density of mETGs since z~1 to the present, just accounting for the effects of the major mergers strictly-reported by observations. Here, we describe the relative, coordinated role of wet, mixed, and dry major mergers in driving this assembly. Accordingly to observations, the model predicts that: 1) wet major mergers have controlled the mETGs buildup since z~1, although dry and mixed mergers have also contributed significantly to it; 2) the bulk of this assembly takes place during the ~1.4 Gyr time-period elapsed at 0.7<z<1, being nearly frozen at z<~0.7; 3) this frostbite can be explained just accounting for the observational decrease of the major merger fraction since z~0.7, implying that major mergers (and, in particular, dry events) have contributed negligibly to the mETGs assembly during the last ~6.3 Gyr; and 4) major mergers are responsible for doubling the stellar mass at the massive-end of the red sequence since z~1. The most striking model prediction is that at least ~87% of the mETGs existing at z~1 are not the passively-evolved, high-z counterparts of present-day mETGs, but their gas-poor progenitors instead. This implies that <~5% of present-day mETGs have been really in place since z~1. The model derives a redshift of final assembly for present-day mETGs in agreement with hierarchical models (z~0.5), reproducing at the same time the observed buildup of mETGs at z<~1.(Abridged) 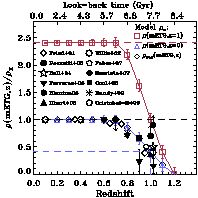