We investigate the characteristics of young (<20 Myr) and bright (L X > 1 × 1036 erg s-1) high-mass X-ray binaries (HMXBs) and find the population to be strongly metallicity dependent. We separate the model populations among two distinct formation pathways: (1) systems undergoing active Roche lobe overflow (RLO) and (2) wind accretion systems with donors in the (super)giant stage, which we find to dominate the HMXB population. We find metallicity to primarily affect the number of systems which move through each formation pathway, rather than the observable parameters of systems which move through each individual pathway. We discuss the most important model parameters affecting the HMXB population at both low and high metallicities. Using these results, we show that (1) the population of ultra-luminous X-ray sources can be consistently described by very bright HMXBs which undergo stable RLO with mild super-Eddington accretion and (2) the HMXB population of the bright starburst galaxy NGC 1569 is likely dominated by one extremely metal-poor starburst cluster. 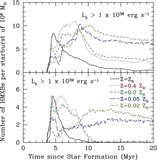