Extremely Large and Hot Multilayer Keplerian Disk Around the O-type Protostar W51N: The Precursors of the HCH II Regions?

We present sensitive high angular resolution (0farcs57-0farcs78) SO, SO2, CO, C2H5OH, HC3N, and HCOCH2OH line observations at millimeter and submillimeter wavelengths of the young O-type protostar W51 North made with the Submillimeter Array. We report the presence of a large (about 8000 AU) and hot molecular circumstellar disk around this object, which connects the inner dusty disk with the molecular ring or toroid reported recently and confirms the existence of a single bipolar outflow emanating from this object. The molecular emission from the large disk is observed in layers with the transitions characterized by high excitation temperatures in their lower energy states (up to 1512 K) being concentrated closer to the central massive protostar. The molecular emission from those transitions with low or moderate excitation temperatures is found in the outermost parts of the disk and exhibits an inner cavity with an angular size of around 0farcs7. We modeled all lines with a local thermodynamic equilibrium (LTE) synthetic spectrum. A detailed study of the kinematics of the molecular gas together with an LTE model of a circumstellar disk shows that the innermost parts of the disk are also Keplerian plus a contracting velocity. The emission of the HCOCH2OH reveals the possible presence of a warm "companion" located to the northeast of the disk, however its nature is unclear. The emission of the SO and SO2 is observed in the circumstellar disk as well as in the outflow. We suggest that the massive protostar W51 North appears to be in a phase before the presence of a hypercompact or an ultracompact H II (HC/UCH II) region and propose a possible sequence on the formation of the massive stars. 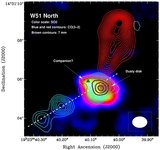