We measure the clustering of dark matter halos in a large set of collisionless cosmological simulations of the flat ΛCDM cosmology. Halos are identified using the spherical overdensity algorithm, which finds the mass around isolated peaks in the density field such that the mean density is Δ times the background. We calibrate fitting functions for the large-scale bias that are adaptable to any value of Δ we examine. We find a ~6% scatter about our best-fit bias relation. Our fitting functions couple to the halo mass functions of Tinker et al. such that the bias of all dark matter is normalized to unity. We demonstrate that the bias of massive, rare halos is higher than that predicted in the modified ellipsoidal collapse model of Sheth et al. and approaches the predictions of the spherical collapse model for the rarest halos. Halo bias results based on friends-of-friends halos identified with linking length 0.2 are systematically lower than for halos with the canonical Δ = 200 overdensity by ~10%. In contrast to our previous results on the mass function, we find that the universal bias function evolves very weakly with redshift, if at all. We use our numerical results, both for the mass function and the bias relation, to test the peak-background split model for halo bias. We find that the peak-background split achieves a reasonable agreement with the numerical results, but ~20% residuals remain, both at high and low masses. 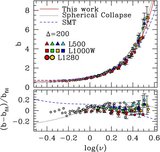