We present light curves of three classical novae (CNe; KT Eridani, V598 Puppis, V1280 Scorpii) and one recurrent nova (RS Ophiuchi) derived from data obtained by the Solar Mass Ejection Imager (SMEI) on board the Coriolis satellite. SMEI provides near complete skymap coverage with precision visible-light photometry at 102 minute cadence. The light curves derived from these skymaps offer unprecedented temporal resolution around, and especially before, maximum light, a phase of the eruption normally not covered by ground-based observations. They allow us to explore fundamental parameters of individual objects including the epoch of the initial explosion, the reality and duration of any pre-maximum halt (found in all three fast novae in our sample), the presence of secondary maxima, speed of decline of the initial light curve, plus precise timing of the onset of dust formation (in V1280 Sco) leading to estimation of the bolometric luminosity, white dwarf mass, and object distance. For KT Eri, Liverpool Telescope SkyCamT data confirm important features of the SMEI light curve and overall our results add weight to the proposed similarities of this object to recurrent rather than to CNe. In RS Oph, comparison with hard X-ray data from the 2006 outburst implies that the onset of the outburst coincides with extensive high-velocity mass loss. It is also noted that two of the four novae we have detected (V598 Pup and KT Eri) were only discovered by ground-based observers weeks or months after maximum light, yet these novae reached peak magnitudes of 3.46 and 5.42, respectively. This emphasizes the fact that many bright novae per year are still overlooked, particularly those of the very fast speed class. Coupled with its ability to observe novae in detail even when relatively close to the Sun in the sky, we estimate that as many as five novae per year may be detectable by SMEI. 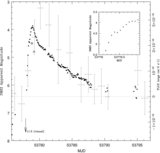